Tea is a drink closely cherished by millions across the world! Tea drinking is one of those simple experiences in life that we so often take for granted.  You enjoy the tea with your morning news paper or by the vending machine in your office – chatting with colleagues – enjoying the small well deserved break from work. However even before the intrusion of internet and social networking platforms like Orkut and Facebook, Tea rooms have been change agents in the society for years – facilitating social networking since time immemorial! Be it China, Japan, India or UK, rest of Europe and Middle East/ Africa – it has been a national pastime for many – for generations!

In India, the concept of preparing tea is a tad different than maybe rest of the world. We love to boil the tea till it can no longer colour the water brown! Add to it a some milk, a generous dose of sugar and any or all of ginger, cardamom, cinnamon, cloves or even a tad of green chilli – the tea becomes a magic potion to be devoured as a “cutting chai” (a cup of tea which is just big enough for 3 whole gulps and is a tad cheaper than a full cup of tea) across those millions of tea stalls across India. The experience of drinking tea is enriched further by having it from a cup made of mud and brick – which gives it a different, kick altogether! The tea cooked on coal or burnt wood tastes definitely different than the one cooked on gas stoves and electric cooking ranges! However the British tea is prepared differently and has been experienced differently! 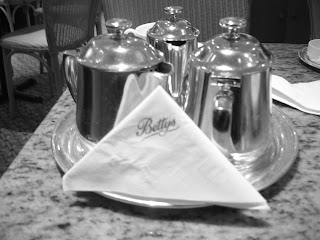 The preparation of British styled tea or “English Tea” which my father so often calls it is not as complicated as the Indian chai. You have a tea pot – typically made of porcelain or silver/ stainless steel – which has the hot water and tea leaf/ tea bag romancing each other like a couple on their first honeymoon. A small pot of milk around it adds some color to the ambience in addition to the sugar cubes which promise to bring in sweetness to the experience.  Tea drinking has been a national past time in the UK for ages. 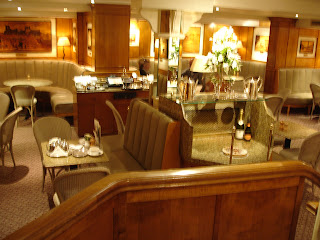 However the invention of having a tea in the afternoon was by Anna Russell, Duchess of Bedford. Since then, numerous tea rooms have been opened in the UK since the early 1700’s which serve of tea, coffee, cakes, scones and other snacks typically had in tea. It has been a social networking platform surviving for more than 300 years in England – way before the invention of computers the internet or facebook! Of course this social networking platform has typically been exploited by women more than men as the atmosphere is sedated and subdued in a tea room. The men have been exploiting the other social networking platform – predominantly operating in the evenings – Pubs! Of course that would be the topic of another blog some other day! The tea rooms also have been frequented by men – of course. If you think back at history – the breadwinner in the family were predominantly men. The women took care of the household chores, kids and other areas. A visit to the local tea room in the afternoon and enjoying a sip of tea and loads of gossip before the men got back from work seems a very logical experience for the continued evolution and sustenance of tea rooms for years. The UK is home to one of the classic tea rooms – some which survived the test of times and others which dissolved into oblivion with the advent of Starbucks, Costa Coffee or other trendy coffee joints!

Our local expert and friend who gives these unique insights to experience UK in a British way – Guy Bradshaw had advised us to visit Betty’s Tea Room in Harrogate. Betty’s tea room was opened in the early 1900’s and is one of the oldest and successful running tea room chain’s in the UK. It is predominantly based in Yorkshire – with branches across Harrogate, York, Northallerton, Ilkley in Yorkshire – though some of the outlets are also outside of Yorkshire. Today, more than a million customers visit Betty’s every year – that is almost 20% of the population of Norway! So on a lazy Sunday afternoon in mid September after a late lunch which got over at 4pm, we went down to Harrogate to tick off yet another things in our “to do list of things” in England before we hop back to India or yet another country! The to do item - to enjoy the weekend afternoon tea at Betty’s in Harrogate. 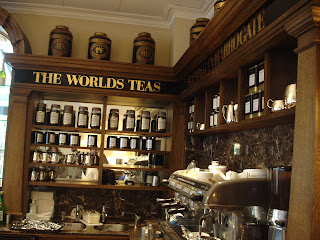 There were two tea rooms of Betty’s in the spa town of Harrogate and we decided to go the one on Parliament Street – the nerve centre of Harrogate city centre. Betty’s Tea room looked pretty upmarket and chick from the exterior. We were waited to be seated by our hostess and finally we walked down one or two floors below the ground floor to our part of the tea room. As we walked down – it was amusing to see so many people enjoying their lazy Sunday evening tea’s – dressed almost like they would be on their wedding day. 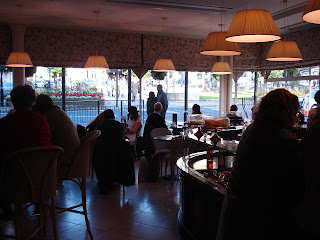 There was a piano on the ground floor and the pianist was playing tunes which could make you feel for a moment that you were not in this era – but in the Victorian era! With the music in the background and tea aroma and steam sizzling from the tea cups, the audience seemed to be in a magical trance in their own private conversations in a very public environment! After we were seated, we were treated to the menu card – rich in the varieties of tea and light snacks and refreshments like cakes, scones and others. We decided to go for the Yorkshire cream tea – to have a truly Yorkshire experience! 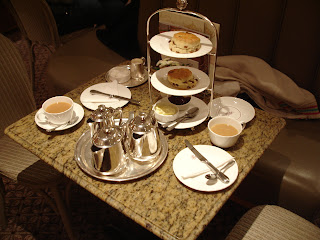 We spent time soaking in the ambience – the dim lightings and the surrounding walls with pictures of places in and around Yorkshire – famous and not so famous. There was a couple – an Asian lady and her British boyfriend next to ours who were looking very much like the couple who started dating a week back. The table behind us was again with a British Asian – maybe a Pakistani or Punjabi gentleman with his mom. The rest of the room was full of local Englishmen and their families enjoying the tea. The pianist did make his presence felt even two floors down to this basement – and unique it was! In between our conversations and comparing it to the experience of having tea in the tea stalls in India, my wife and I saw our table filled with a gleaming silver cake stand laden with freshly baked miniature scones, fresh cream and homemade strawberry jam. Not to miss the gleaming silver tea pot puffing magical steam in the air!

We had ordered for two tea pots – and through those 90 minutes we were there at Betty’s – we ended up sipping at least half a litre of tea each – while enjoying the peace and quietness.  It was very relaxing to enjoy this experience!

The tea drinking experience at Betty’s was a tad different to the one we had in the village of Dent – in Yorkshire Dales National Park. The one at Dent was less commercial and in the rural settings and served at the ground floor of a farmer’s house which was probably multi-tasking as a farm house, tea room and Break & Breakfast all at the same time. The ambience there and the company of my sister and her family and the conversations was a different experience than the one at Betty’s.

Hopefully the tea rooms in England will definitely be there for years to come! Its traditional, historical, cultural significance and role as a social networking platform for centuries will never be undermined!
Posted by Atreya rocks at 1:57 PM

@Deepak. Very beautifully written article and very informative. This article has true mark of the writer and traveler in you.