Back in Mumbai in the sweltering heat!

Just over 5 days old in India! Just about winded off a long trip to Norway. Was looking forward to reach the “Maximum City – Mumbai” from a long time! Nice to see the end of Bachelorhood 2.0 and move back to family back home in India.


In less than 5 days, I have had a bath for over 15 times! Just goes to explain the irritation caused by a temperature of 30 degrees Celsius plus humidity of over 66%! Just getting used to the traffic, huge crowds and the dust in addition to heat. But again, this was where I was born in and is my Janmabhoomi (land of birth) and karmabhoomi (land of work), so no further cribbings!

In this blog, will continue updating pieces of how easy and difficult I am finding to adjust yet again in India. When I relocated back from the US, it was not that difficult as I dived straight into student life. This time, after having worked in continental Europe for over a year and a half, I have chosen the path less trodden - choosing to come back to Mumbai to see where life takes me next!

Will keep this updated. TC till then!
Posted by Atreya rocks at 6:41 PM 2 comments:

Email ThisBlogThis!Share to TwitterShare to FacebookShare to Pinterest
Labels: Mumbai 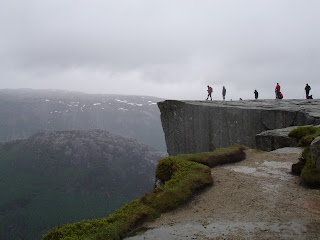 On Saturday, May 14th 2011, me and my colleagues from TCS scaled Prekestolen, a massive cliff of about 2000 feet in the outskirts of Stavanger, Norway. This blog shares my experiences on the same.
About Preikestolen:
Preikestolen or Prekestolen, also known by the English translations of Preacher's Pulpit or Pulpit Rock, and by the old local name Hyvlatonnå, is a massive cliff 604 metres (1982 feet) above Lysefjorden, opposite the Kjerag plateau, in Forsand, Ryfylke, Norway. The top of the cliff is approximately 25 by 25 metres (82 by 82 feet) square and almost flat, and is a famous tourist attraction in Norway.
The total hike is 3.8 km (2.4 mile) – each way and this is one of the most famous attractions to visit in Norway. It is quite dominant in a lot of souvenirs magnets, mugs, vodka shot glasses and other desk paraphernalia. A lot of books inciting tourists to visit various places in Norway are conveniently placed in the Oslo, Stavanger and other airports. Most of these books would invariably have a pic of the square 25 by 25 metres top of Prekestolen.
How to get there:
The best time to visit this place is between April and October. During the other days in the year it is not advisable to trek due to snow and ice, which make it a dangerous and impossible venture. The best way to reach Preikestolen is to travel to Stavanger city. Regular flights operate from all over Europe, Norway and Scandinavia. One can easily take the airport express bus / taxi from Airport to the pier from where ferry’s leave towards an island called “Tau”. The pier is called “Fiskepirterminalen”. One can also take their cars / vehicles on the ferry. Tau island is about 20 minutes by ferry. From Tau, regular busses operate till the base camp of Prekestolen, which is about 20 kms away. There is a typical visitor information center, parking lot, souvenir shop and rest rooms at the base camp.
﻿
﻿

I have been in the “Land of the Vikings “ or Norway for a little over 19 months. Apart from taking an unplanned short hike to Tau island, I had not had a serious trek in Norway. The country is famous for its huge mountains which open options for trekking outdoors to catch breathless glimpses of the natural beauty and the fjords. Before leaving Norway and probably never to come back, I got this opportunity to tick off one “must see” from my checklist almost the last but one weekend that I was in Stavanger. My office colleagues – Vikram, Ravi and Kim drove down from Oslo to Stavanger and crashed in at my place on late Friday night. They intended to trek Prekestolen the next day early in the morning. I was as usual having the typical dilemma of uncertainty that plagues us Geminines always. The uncertainty was to go for the trek or not to. On one hand what held me from going was packing, cleaning my house the last weekend that I was there before heading to Oslo. On the other hand, I wanted to go to catch glimpses of the view from the top of Prekestolen. My quest to catch glimpses finally caught the better of me! After reading the experiences of many folks on internet, I found it not to be that tough a trek. So if it was going to be risky, I had prepared myself to halt till the point I reached and wait till the rest of my team trekked up and came down. Only time will tell if I could scale Prekestolen!
Between Friday night and Saturday night, managed to sleep for over 4 hours. We had a light breakfast and left by 8.30 am from my house, which wasn’t far from Fiskpeterminalen. After loading the car in the ferry and landing at Tau, we drove aimlessly for half an hour, loosing our way – thanks to the GPS in Vikram’s car, who had an off day on Saturday! Finally we circled back to the base camp and started our trek at 10.30 am.
The weather forecast for the day was rain from 3pm and so we wanted to come back before that. As usual the weather forecast was no good. Right from the time we started trekking, it started drizzling. Armed with just one bag with a bottle of water , a Kvik Lunsj ( a chocolate similar to Kit Kat found in India) and some dates, the Indian Vikings (Vikram, Ravi and myself) began to scale Prekestolen with the Norwegian Viking (Kim)!
The trek to Prekestolen is a combination of slopes with sharp inclines at places and flat walk paths on wooden boards, when you are scaling between cliffs.
﻿ ﻿﻿﻿﻿﻿﻿﻿﻿﻿There are boulders of huge rocks interlaced various stretches. These boulders weave a mosaic pattern and form a stretch of steep slope in between. The occasional odd water stream seeps between these boulders and with rain dripping down, its imperative to watch your step and step cautiously on the right rock. Avoid the ones which have a green tinge (marshy) or the ones which appear loose, as you may slip and fall. It is advisable to wear rubber soled shoes than the ones with heavy synthetic grip, as you get very good at very steep angles and its not heavy on the feet. You can stay nimble footed yet climb with no worries.
We found a lot of fellow trekkers – Norwegian, Chinese, Japanese, British on our way who were either scaling up or trekking down after the view. They were of all ages from probably 8 to 65 – 70, climbing at their own pace. During our trek, while different people took the lead at multiple instances, I was always the last or the last but one in the group. I was really testing out my knees and ankles with the full load of 80 kgs of my weight! That’s about 10 kgs more than what they are designed for. I was just calmly hoping that I don’t break the non-stop rhythm we maintained during our conquest to the top with a request for a break / breather !
Glad that we finally reached the top in little over an hour and a half, which was a delightful surprise and good scorecard on our fitness levels. Typically depending on fitness levels it takes one to two hours each way. Once we reached up, we clicked pictures and enjoyed the scenic views of the Lysefjord from the top of Prekestolen.  The scenery is just out of the world!
﻿
﻿

Small waterfalls along the ranges looked like tears from the mountains, moved by their own beauty! Though it was a cloudy and rainy day, we still caught some fantastic views of the fjords. If it would have been sunny, it would have been much more memorable, though a little less adventurous. We had some water, dates and Kvikk Lunsj to recharge our batteries.
Finally we began the descent after our photo shoot session. During the descent we accidentally got separated. Kim and Vikram took one path to descend (the same by which we had climbed up). Ravi and I managed to take a different path downhill. The path we took was the one that was often described in most of the websites that I had read overnight. In some stretches, you had to hold on to chains / railings to descend tricky slopes. They were definitely safe, but a tad scary. This ain’t for the lighthearted folks! But having said that, if I could trek Prekestolen, so could a 7th grader who just began hanging out with friends without parental guidance!
Ravi and I were exchanging stories of our lives and similar expeditions while climbing down and never indeed felt how the time flew by. We enjoyed the scenic views and various intervals with the rain splashing a tad harder on us. Finally we scaled down in less than an hour and a half. We managed to reach about ten minutes before Kim and Vikram. In the end, we all were overjoyed with the adventure and were glad we conquered Prekestolen! We did it in record time of three and a half hours, which includes halt taken for pictures and light snacks.
We were feeling warm and wet on the inside due to the sweater and jackets and workout and cold and wet on the outside because of the rain. Not the right combination for your body, but am glad we switched on the car heater to full blast on the way to Tau for the ferry back to Stavanger.
A Saturday well spent indeed. I am in person happy that I was not the weak link in the chain and managed to complete the trek without being the show stopper due to fatigue! Thanks to my office folks for driving down from Oslo this weekend. All in all it was a great adventure!
The trick in a trek: The Management Mantra ﻿﻿﻿﻿﻿
﻿

As you decide to do a trek, there are a lot of feelings stirred inside you. It is anxiety, happiness and some worry of eventualities or casualities. At times its also your own lack of self belief on whether you will be able to make it till the top, given what you hear from folks and your history of fear of altitudes. In the end, if you break it down – there are just two things – short term goals and long term goals that you need to set yourself. Your long term goal is to reach the flat rock of Prekestolen at the top. The short term goal is the next 100 – 300 meters of stretch you see and plan to scale up and scale down, without looking it at the entire stretch. The entire stretch will always make you scary and make things go wrong. Just keep focusing on your short term goals – of scaling the next few meters and rocks and plan your strategy. If you get your short term strategies right, your long term strategy will be in place!