To live a life outside of your home country, you need to make adjustments in the new country with a lot of things – on the food, culture, public holidays, festivals, social circles and anything which is familiar and yet taken for granted in the home country.

In the past few decades, Indian’s have been travelling across the globe to various countries – thanks to the opportunities around the globe for skill and talent. Because of the burgeoning population of 1.2 Billion people and the critical mass of talent who can be positioned for these opportunities, India has been “favourably disposed” to reap benefits of this human capital dividend.

What makes an Indian stick outside his home country is the availability of Indian retail stores (which aid in providing all the ingredients for cooking Indian food), Indian restaurants (which are at times owned and served by Nepali’s, Bangladeshi’s and Pakistani’s in addition to Indian’s), internet (which help you browse newspapers, watch movies, listen to songs), movie theatres (which show Bollywood or Regional Movies) and places of worship (like Hindu Temple, Gurudwara, Mosque, Churches etc), Indian associations etc. These are responsible for getting an Indian community together in a foreign nation and form a social group to create an “India like environment” abroad. One of the key binding ingredients are the places of workship. In my trips abroad – to US, Norway or UK i have always found Hindu Temples at a radius of a 15 minute drive to 2/4 hour drives – in whichever city i was – in any of these countries (maybe Norway outside of Oslo is an exception).

Though Meenakshi & I have been to the Hindu Temple in Leeds on the day of “Mahasivaratri” in 2012, we always had it on top of our lists to visit the Balaji temple at Dudlee, Birmingham. I have always had a faith favourably disposed to Lord Balaji / Lord Venkatesh over the last few years (which doesn’t take anything away from other Gods – Hanuman/ Lord Shiva / Lord Ganesh and others). I have visited Lord Balaji in Tirupati, Nerul, Pittsburg (Pennsylvania), Bridgewater (New Jersey) and also probably also paid respects to him at the Murugan temple in Oslo. We however got a chance to visit the Dudlee temple in August, where we had a rare family outing to a temple in a foreign country.

On a Saturday morning in August, Meenakshi & I drove down from Leeds to Birmingham with my parents, who were here for vacation. My sis – Anu, bro-in-law Mahesh and niece Sanju drove down to Brimingham from London. Since Birmingham was conveniently located between Leeds and London (2 hours from each city), it was a convenient place to meet and have my parents on the most comfortable , quickest and preferred way to reach London to spend time with Sis and her family.
﻿
﻿We agreed to reach there by around 4pm in the evening for the evening. Enroute, we experienced some very heavy rains on the way – which was threatening to almost cancel the entire trip. In spite of the obstacles, we persisted and surpassed all the heavy showers, weird sounds from the car tyre during rain (which on closer inspection did not pose to be a risk) and reached the temple a little after my sis’s family reached. Much more than simply a physical complex, it brings together a remarkably wide cross-section of Hindus into a vibrant, thriving organization, and is now recognized as one of the leading Hindu institutions in UK.

It was a wonderful experience entering the temple, almost welcomed by two stone elephants in white, with the board of the temple in full view. The parking lot was big enough to probably accommodate at least 250-300 cars at once.

The temple is set in a 21.5 acre site, with a number of different shrines and other facilities and it has grown over a 10-year period to become the first for Lord Balaji and physically largest South Indian temple precinct in Europe.It was designed to replicate the Tirupati Venkateswara Temple in Tirupati, India, which is the second busiest and richest religious centre in the world after the Vatican. 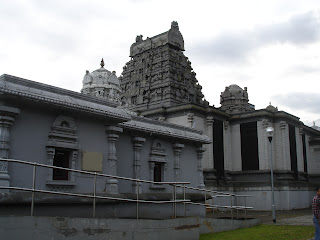 ﻿ ﻿
The main sanctum sanctorum housing Lord Balaji – has the typical layout that you see in a lot of Balaji temples. We had the main idol of Lord Balaji, surrounded by Sri Devi and Bhoo Devi. We also had small temples of Goddess Padmavati, Lord Hanuman and Lord Satyanarayana inside. The effect of incandescent sticks (called agarbatti’s in hindi), sandalwood smell of the “chandan” and flowers was creating a mystical effect in the background of the temple lamps, priests chanting soft prayers. This is what all of us praying there inside the temple would have experienced in a temple back home in India. It brought back strong memories of my own temple visits across Mumbai and India. I was really glad to have this familiarity of time with the Gods, even outside of my own country. My parents were equally impressed with the temple and it was just like visiting a temple in India. In fact, Balaji temples are known for being very crowded in India and you get very less viewing time or facetime with the main Lord. Here it was not timed and you could get nearly infinite facetime with the main Lord’s idol, which is any worshipper’s dream come true! We also did a “Archana” for the family – a special service to the god to bless the family. Post that we collected all the prasadam – “Tirupati Laddu”, which is any Indian’s favourite. You can also purchase Laddu’s – like in the Tirupati temple in India.


The temple has shrines for Lord Ganesha, Lord Murugan, Lord Saibaba and for the Navagraha’s outside the main sanctum sanctorum.


﻿ ﻿
After the “darshan” with all the Lords and temples, we walked and went to the small makeshift cafe inside a tent, which was right inside the temple premises to satiate our hunger. The makeshift cafe could have easily been one of the millions of street food vendors we have back home in India. They were playing some old Tamil movie numbers – which were no way near chartbuster numbers, but fun to here for the theatrics in the song. As they say – the fun is in ripping apart these numbers over friendly banters and family conversations! This place is definitely one of the must visits for other worshippers as well – as we had a waiting time to give our orders and then to be served. The menu card was impressive and had the usual suspects – idli,dosa, vada, coffee and other south Indian delicacies. Very crispy onion dosa’s , sada dosa’s and other south Indian delicacies then helped stopped the rumble in the tummy and satiated our hunger! There were very few chairs in the tent, but one doesn’t mind standing to have authentic south Indian food. A small shop - Ganesh Foods outside the cafe was selling all the south Indian ingredients like masala’s, pickles, vegetables, flour and other delicacies for a quick snack. We eased the wallet for some quick purchases, which still have to be used! So much for impulsive buying!

Once we were done, we spent some time outside sipping tea and cucumber sandwiches – thanks to my sis! Once done, we switched my parent’s to the other car and drove back to Leeds.

﻿ ﻿
In a span of two months, we luckily had another chance to visit Balaji temple. This weekend we had been to Stone for the Stone Food Festival and to stay over at a friend`s place. Stone is located about 45 mins from the temple in Dudlee. Meenakshi & I decided to make a visit to the temple on a Sunday morning. We had a very good darshan and had the prasadam – “Tirupati Laddu”. During the weekends they also serve free food starting 12.30pm for a limited period. Food connoisseurs that we are, its not often that we get treated to a) eating in a temple b) getting south Indian food in UK. We enjoyed the wonderful rice, sambhar, potato curry and kesari sweet. I am not a sucker for sweets, but they were so magical, i had a gulp even before Meenakshi blinked an eyelid and shook her head in disbelief!


With gratitude, we then went out to the cafe to have idli’s and wada’s packed from the temple cafe to be enjoyed later in comfort! While stepping out, we saw a nice fountain with Lord Vishnu in his “sleeping pose” and Lord Lakshmi. Haven’t seen that one before ever in my life outside a temple!

As we made our way from the temple to the car parking lot, we could overhear some nice hindi songs song by kids in the local activity centre inside the temple – a weekly gathering of music learners and practitioners. In addition to music, the temple also has other activities like Matrimonial Service, Volunteering, Balaji Vedic and Art heritage school, Bharatnatyam dance classes etc – an all round exposure to various facets of the Hindu religion. Indeed glad to have temples like these outside of India, continuing to nourish our soul and spirit and serving reminders of our service to society and future generations! 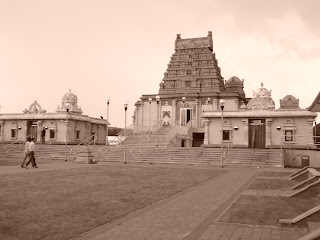 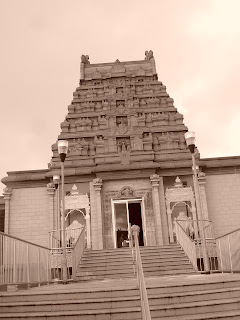 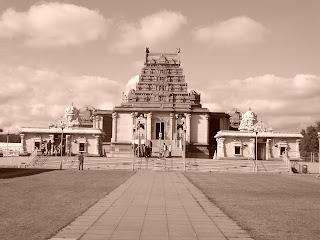 Looks like you and Meenakshi are nomads on weekends. Keep writing bro.
Especially liked the line "i have always found Hindu Temples at a radius of a 15 minute drive to 2/4 hour drives – in whichever city i was – in any of these countries".
Reminds me of a blog I wrote last year- Of heaven and Temple

:) Vishal...making last of the Summer (which is almost gone). Next 6 months (winter) would anyways be a time to be "under house arrest" - thanks to weather. Read your other blog - awesome!

Unknown said...
This comment has been removed by the author.
7:08 AM