The summer was just setting in. It was the last weekend in April, just after our short trip to India. We did not have much to do that weekend. We wondered, if it would be nice to start seeing new places to escape the boredom that winter months had brought in. One of the first places we visited was Whitby Abbey. As always we packed in a sumptuous packed lunch of home cooked food - lentils and rice (lauki dal and rice), carried over from Friday night. 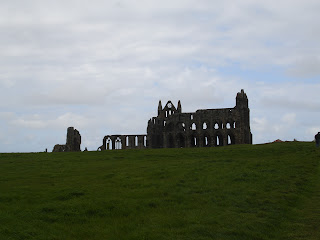 Whitby Abbey is a ruined Benedictine abbey overlooking the North Sea on the East Cliff above Whitby in North Yorkshire, England. It was disestablished during the Dissolution of the Monasteries in the UK. It was first setup in 657AD, so from a time period perspective, it is very dated! Further history can be found at Wikipedia.
Bram Stoker was inspired by Whitby Abbey’s gothic splendour when writing Dracula.

This is one of the most atmospheric visitor attractions on the Yorkshire coast. 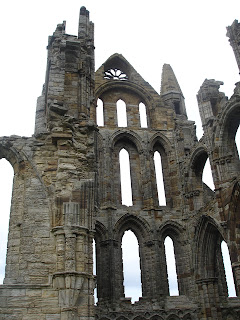 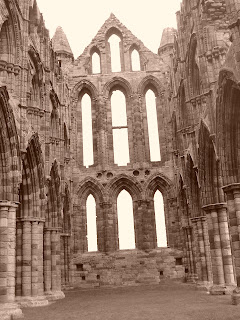 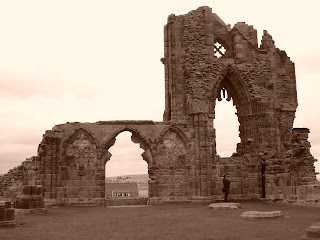 Though Whitby has an entrance fee, there is a very well preserved and unique visitor interactive center with dramatic digital reconstructions. If you have an ear for tuning into history, you can listen to the audio tour as you wander around the ancient ruins and enjoy the stunning views. We decided to soak it all in by ourselves over using the audio tour.Some of these ruins had so much of history and stories within them. Wish they could talk and take us through those olden days to narrate their stories as is – just like in the movies! 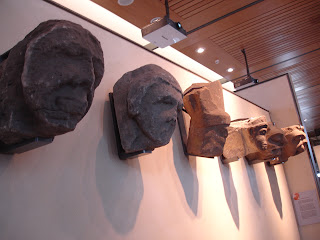 The Whitby Abbey also has a very nice view of the North Sea, since it is at the North Western tip of UK. 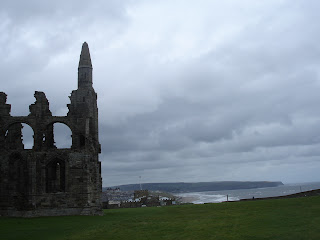 The North Sea separates UK from Norway and other Nordic countries. The other side of this North Sea, where we were from 2009-11! 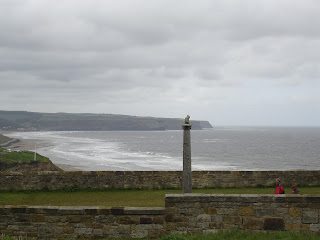 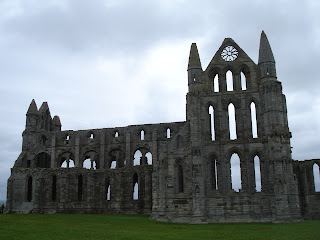 The weekend (April 28th – 29th) also happened to be the Whitby Gothic Weekend. Founded by one – Jo Hampshire in 1994, the WGW has grown into one of the world’s premier goth events bringing thousands of people to the town. The WGW's official line is to provide musical entertainment with bands and DJs, although the culture of the WGW has far outgrown that simple agenda. Whitby Goth Weekend now has something for everyone with an interest in goth and all things alternative. It's a celebration of the non-conformity, diversity and freedom of expression the scene embodies. We did see a lot of visiting tourists dressed in a very different way, which perhaps was the freedom of expression they sought. We decided not to invade their privacy and take pictures, though they were happily clicking pictures amongst themselves.

We spent about 2 hours insidethe Abbey, taking a walk along the green grass. Once we were done with adoring its beauty, appreciating its eeriness and learning all that we wanted to from the interactive visitor center, we had our quick lunch right inside the car and drove back to Leeds. A day well spent!

If you are a sucker for old monuments or run down heritage structures, Whitby Abbey should definitely be right on top of your lists!
﻿﻿﻿
﻿

Count Dracula and Mina
Count Deepcula and Meena ....
Coincidence or what