During times of hardships and challenges, never given up on hope. Hope is everlasting and makes you look forward for the light at the end of the tunnel than the immediate darkness surrounding you. 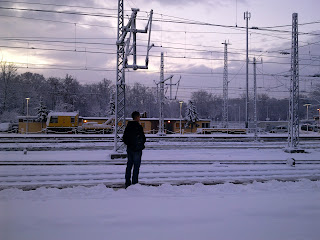 
1. This pic was taken during my trip to Frankfurt, Germany in Dec 2010. I had gone to the TCS Frankfurt office for training. On my way back, i was on a train from Frankfurt station to Frankfurt airport.

2. Saw this young man waiting for train on a cold evening. The sun was hidden from the clouds and this man has his eyes and hopes pinned far beyond on the tracks – waiting for his train to escape the chill on a wintery and snowy December evening.

This blog is being published during my train journey between London and Leeds. Heading back after a week in London back to home sweet home!
Posted by Atreya rocks at 10:25 PM

Nice topic. One of my favorite quotes.