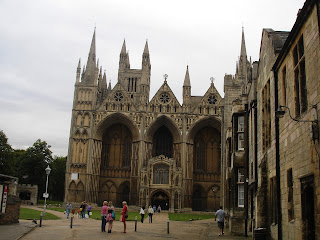 Your work can at times take you to small indiscrete cities and towns and leave you spell bound with the beauty they hide around the corner. I had to work out of our Peterborough office (which is one of the most wonderful office facilities TCS has) a weekend and also my wife was in the same office for training. We thought; why not make a quick visit to the “Peterborough Cathedral” as recommended by our friends cum colleagues Prashant and Shruthi. We gave it a thought and finally in between the hustle bustle of a Friday evening and closure hours of cathedral we miraculously paid a very quick trip. The cathedral is right at the Peterborough city center and has a collection of shops around it selling everything from coffee, clothes, and groceries to mobile phones. This is the best part of being in England, where the history and culture peacefully co-exists with the life essentials of modern life. I don’t remember having experienced this in the US.

Peterborough cathedral is one of the UK’s top landmarks and is one of the finest Norman buildings surviving in Europe today. The original church, known simply as "Medeshamstede", was founded in the reign of the Anglo-Saxon King Peada of the Middle Angles in about 655 AD, as one of the first centres of Christianity in central England. The monastic settlement with which the church was associated lasted at least until 870, when it was supposedly destroyed by Vikings. Over the period, it was however rebuilt between 1118-1237 and then renovated and improved further over the next few centuries, surviving the test of architecture, natural deterioration and other deterrents. A standing testimony of survival. In May 1988, Queen Elizabeth II had attended a special service here to mark Peterborough Cathedral’s 750th anniversary! To think of it, i was only 8 years old, 742 years old younger to the cathedral?

We entered the Cathedral and the interiors were very peaceful, piousand magical. Since a service was to commence, we did not want to be a bother and we quietly tip toed out. However, before we left, we brought a booklet of the Cathedral for £5 which gives the history of the cathedral with very rich pictures of the interiors. It is one of my treasured collectibles for years to come!

However you are treated for more! As you step outside of the Peteborough Cathedral, you stand across Cathedral Square. The Guildhall or Butter Cross (1669–1671) is located out here. It looks equally pretty and fascinating as you step out. The Peterborough Guildhall was built between 1669–1671. The 17th century building is also known as Butter Cross, and is a traditional Market Cross often found in the center of old market towns in England. The Guildhall is raised on columns and the open area beneath it used to be occupied by butter and poultry markets.

The impressions we got the first time we saw the cathedral from the outside are totally indescribable!  It appears truly majestic from the time you set your eyes on it and it is hard to take your eyes off it as long as you are in its vicinity!It is truly one of the living wonders of UK! 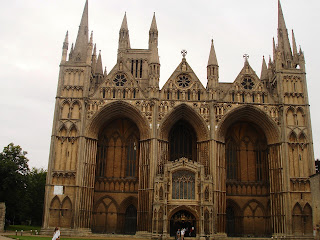 One of the living wonders of UK
Posted by Atreya rocks at 9:08 PM