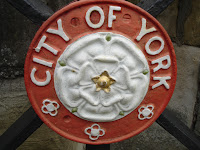 If you happen to reside in Yorkshire county, you will definitely be tempted to go to the National Parks – Yorkshire Dales, Moors, Peak District or Lake District. You will be spoilt for choice to choose amongst the Abbey’s – Whitby Abbey, Bolton Abbey, Kirkstall Abbey etc. Or you may try to head to one of those places with a town house, with lush greenery lakes and landscapes around it – like Castle Howard, Temple Newsam or other places. But one place, which for your kind information ladies and gentlemen – you cannot afford to miss is the City of York! 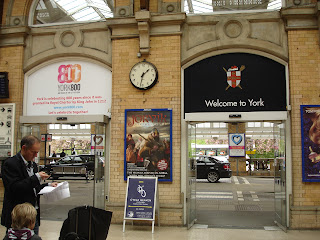 York is the cultural and historical capital of Yorkshire and very much a city that makes you feel 2000 years old and an ageless romantic at the same time! York is gifted with various attractions like the timeless York Minster, the Museums – Jorvik & Railway Museum, the Clifford Tower. But one of the places you cant miss and must visit for a once in a lifetime experience is the York City Walls. One of those weekends in early May, we decided to experience the magic of this historic city by walking through the York City Walls. York is an 800 year old city in the Yorkshire county of UK. It is one of the important historic and cultural capitals of England. In AD 71, the Roman army established a fortress on the banks of the River Ouse called Eboracum. After the Romans, the Danish army conquered the city in 866, the name became rendered as Jórvík. The city name has changed from Jórvík to “York” over the years. The city has stood testimony to changes throughout the rich history.
﻿ ﻿﻿﻿

An important point to note is that the city has been defended by walls of one form or the other since Roman times. These walls extend for 2.5 miles and enclose an area of 263 acres in between them! The walls of course have collapsed and been re-built over the years. The majority of the remaining walls those stand today, which encircle the whole of the medieval city, date from the 12th - 14th century, with some reconstruction carried out in the 19th century and later. York has more miles of intact wall than any other city in England! You start getting a glimpse of the walls from the time you walk out of the York railway station and start walking straight to your left. 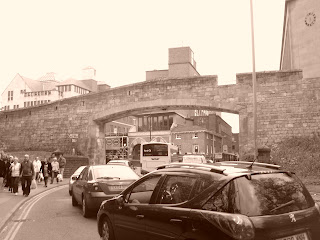 The walls are known as “York City Walls”, “Bar Walls” or “Roman Walls”.The walls still retain all four of their impressive gateways into the city, called bars, as well as 34 of their 39 interval towers. Prominent of these four bars are Bootham Bar, Monk Bar, Micklegate Bar and Walmgate Bar. These restricted traffic in medieval times, and were used to extract tolls, as well as being defensive positions in times of war.

You can start your walk from any of these bars or the other minor bars. But Meenakshi & I first visited the splendid and majestic York Minster first. After having soaked in the richness of its architecture and grandeur from outside (a service was already on inside and we did not want to intrude), we forced ourselves to finally set our eyes off the Minster and walk towards a nice medieval looking gate. As we walked towards it, we passed through a nice and quaint shopping centre. 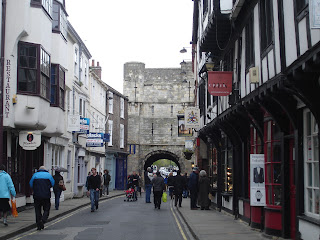 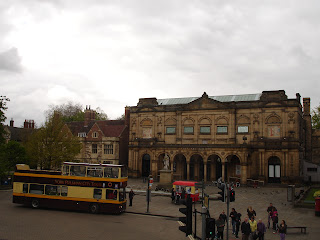 ﻿
Some of the meshed grills also provide a filtered viewing spot and maybe hold more history than this picture can reveal. The stairways at various points - meant for climbing up from one section of the city walls to another look very beautiful. 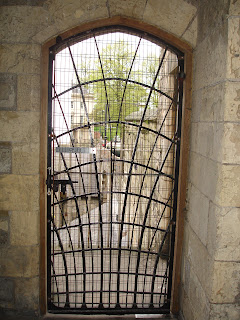 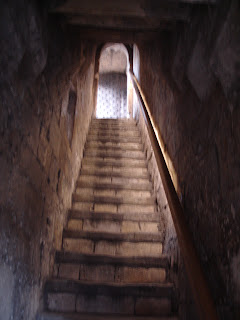 You can steal unique views of the York Minster as you walk around the City Walls of York.
﻿
﻿

Long winding roads around the City Walks are surrounded by trees on both times on some stretches. 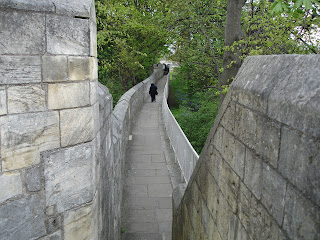 On some other stretches,  you may have the walls on one side and green grass on the other side. Can be a tad unnerving if you want to walk closer to the right edge. 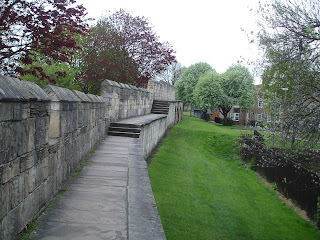 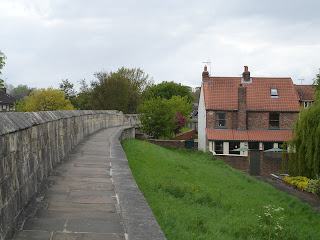 While we were walking along the walls and reached a point from where suddently we couldn't see the York Walls any further and had to climb down the stairs. We felt we had finished walking on the City Walls. At this point, we just turned back to take the pic below 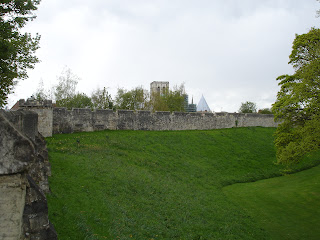 However better sense prevailed when we watched the signs. There is a small stretch of the walls which is not continuous only because there are swamps - small water bodies in between. It has been left as is from the centuries as it water around also served as a security feature for the city.Walk around along the swamps with them to your right and you will then reach the Red Tower. From the Red Tower, you start re-climbing back to the walls.This entire walk in between the two stretches of the York Wall would not be more than 10 minutes. Makes you really ponder over the care the ancient Romans took to retain water bodies and not spoil nature, while building these City Walls!

As you walk along further, you enjoy other important views - like the Wheel of York in the background - overarching over the York train station.

﻿ Finally as you walk down, you cannot stop noticing a) York Minster and b) Tourists, Regulars and other revellers enjoying their walk through the York city walls.﻿﻿ ﻿﻿﻿ ﻿﻿﻿﻿﻿

You end up soaking 2000 years of history during this walk of 2.0 miles on the city walls! The two hours we happily invested in walking on these walls helped us capture the stunning beauty of the city of York through innumerable viewing points.
﻿