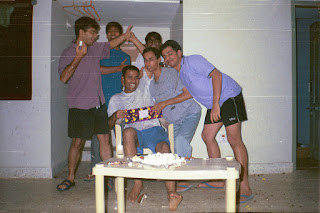 Living with roomies has been an exhilarating experience over the past eight years that i have stayed out of home. It all began way back in 2002 when i moved to Bangalore, fresh after my Engineering degree and joined Infosys. After the initial one month in the "Maurya" Hotel, we had to find accommodation on our own.

I already made 2 friends before moving to Bangalore - Vishal (he was my mate in Engineering college) and Utsav (he was also from Mumbai). So once my stay in Maurya was over, had to look for new people with whom i could share a house with.

Accidentally it so happened that all five of us came together - myself, Vishal, Rana, Sudarshan, Ashish and Kapil. We had an awesome time together in those 1.5 years i spent in Bangalore from 2002 - 2004. The pic above is one of those rare pics of the good times we shared - be it Hooting for India during the 2003 World Cup, watching n number of movies on my small tv set, eating out in most of the bangalore restaurants, boozing in pubs / at home or  buying those cheap Rs. 100 T-shirts on Brigade Road, MG Road during the weekends. Watching movies in the movie halls, shopping at Marathahalli and Commercial Street, going for Go- Karting or walking down in the middle of the friday/ saturday night from MG Road to Koramangala singing songs (just cos we did not want to pay the Rickshaw guy 2-3 times the fare)...was awesome! We had a memorable time! 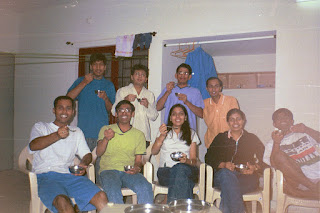 Our group spread beyond the roomies to others - Eti, Manu, Maria and other batchmates from September'02. Its going to be 8 years this month end since we had joined Infosys and it looks as it was only yesterday! Almost all of them have now moved out of Infosys and even Bangalore - barring a few! 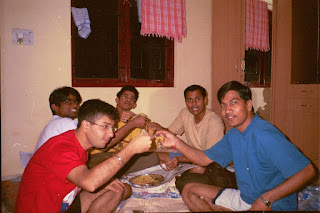 Weekends were spent making plane maggie noodle - 4 packets, putting in a common plate, putting sauce in some areas of the maggi per personal preferences and having it together. We had also kept an ecosystem of support around...and did not let the statistic of 1 IT job creating 4 support jobs wrong. We had a maid servant to wash clothes and clean house, a cook to cook food. It was funny - the maid servant was a Tamilian and none of my other roomies could communicate with her except for sign language, when i was not there. When i was there communicating and getting things done was my cup of tea. Apparently after i left Bangalore in Feb 2004 , these guys still had her for sometime and continued with the sign language! 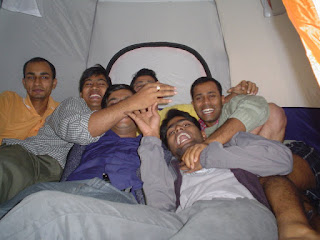 We indeed did some crazy things - like this tent which Vishal had got from his first onsite trip to the US (Suddu and Vishal were the first guys in our group to live the dream and go onsite to US with 1.5 years of joining Infosys. All others like me, Ashish, Rana got our due later). We hoisted the tent right in the big Hall of our 3 BHK, 1350 sq feet apartment in National Games Village, Koramangala and spent silly times over the weekend doing silly stuff like this! 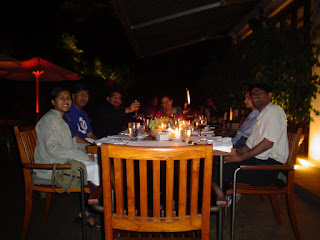 Again this was the time when we had a party in one of the best hotels in Bangalore near Airport Road (probably Taj - can't remember). It was a combination of onsite treat of Vishal, Suddu and bday treat of Rana and someone else and we had a ball of a time. It was a big thing for us then to be in restaurants like this and eating and having wine! Man..those were the days! 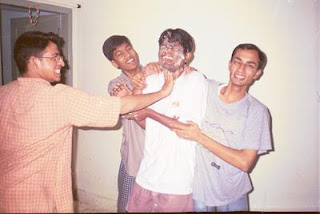 This was taken during the Vishals 22nd birthday. Heheh - it was a typical practise in A-301 Yamuna, NGV to cut cake the night before the bday and smear it on the face of the person. Also the rest used to pool in and buy a gift like shirt / shoes etc. In my case i opted for a VCD Player, on which we saw tonnes of movies for days together on that small TV set i had borrowed from Dad. This then gave way to our days playing X-Box computer games which Vishal had got from his stint in the US. Man - that was more fun - the way each of us had a preference for a charachter in the "Dead or Alive" game and used to compete with each other.

I was admitted to a hospital for the first time in my life in Bangalore where they suspected Dengue fever. Was in the hospital for 5 - 7 days under observation and i am indeed grateful to these guys for taking care of me as they would for any of their family members. Each night i had someone to give me company to sleep in the hospital and got all the food from home. Battling work pressures and other personal priorities - am indeed thankful for the attention and support these guys bestowed upon me. I infact had also informed my folks pretty late (2 days before being discharged) and assured them i was in good hands and there no need to travel to Bangalore. Hands down to you guys!

Then in Feb'2004 me and Vishal decided to move back closer to our homes in Mumbai. So we took a transfer to Pune office of Infosys. Indeed cherished those days with all of these guys. We did have some reunions later in the US - if not all of us together, but still in good groups. Those days and those times will never come back, but glad they did come the way did ! Hands down to my first set of roomies in Bachelorhood 1.0!
Posted by Atreya rocks at 12:02 AM

Email ThisBlogThis!Share to TwitterShare to FacebookShare to Pinterest
Labels: Bachelorhood 1.0

A nice read.. I remember u telling me most of these incidents.. so could relate to it through ur blog... :)

Dude .. very well written ...
Made me nostalgic and also reminds me that i haven't really written anything about the us roomies as a group ... watch my blog and you'll see some updates

@ Srivatsan - Yes man, we indeed had a great time in Maurya and Infy. So where did you move onto?

@ Sandy - Thanks bro. Eagerly awaiting your version of the blog!

Hat's off to you deepak for bringing all those wonderfull memories together. To be honest it was mainly becuase of you that we gelled with each oather so well and did all thsoe silly stuff that makes us nostalgic and miss those days even today.
See if you have some more pics and add to your blog.