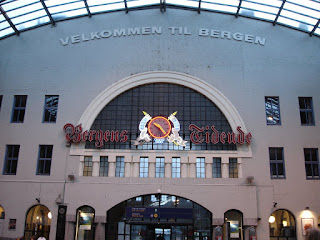 Where: Bergen, Norway
Who: Partner in crime - Wifey & I
How: NSB Train from Voss. This was the last leg of our journey after watching the Fjords in the "Norway in a Nutshell" trip 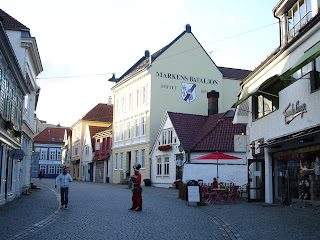 In 10 days time we had to leave Oslo and re-locate to a new city - Stavanger in Norway.  Our plans to visit Paris, France were cancelled - thanks to my laziness leading to delay in booking tickets - the ticket prices had now become unaffordable. So, we thought why not make the most of our vacation by visiting some unique places in Norway itself? We decided to combine two trips - which would include the most talked about tourist attractions in Norway - "Norway in a Nutshell" and Bergen trip. Norway in a Nutshell was a visit to the picturesque Fjords - Sognefjord. Post our Norway in a Nutshell trip (at the end of which most tourists take a train back from from Voss to Oslo) we took the NSB train (a la Indian Railways) from Voss and went to Bergen.

Bergen is the second largest city in Norway with a population close to 260,000 ( almost twice that of Stavanger).Bergen is located in the county of Hordaland on the south-western coast of Norway. It is an important cultural hub in its region, recognized as the unofficial capital of Western Norway and sometimes also referred to as the Atlantic coast capital of Norway. Bergen remained one of the largest cities in Scandinavia, and was Norway's biggest city until the 1830s, when the capital city of Oslo became the largest. 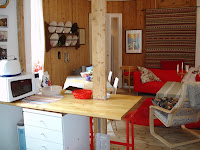 We wanted to experience living in a traditional Norwegian house, so preferred a Bed & Breakfast (B&B) over a hotel. The advantages are a plenty - you can cook your own food (we self catered for the major part of the trip armed with sandwiches, biscuits, ready to eat cup noodles, maggi, chocolates), get to meet local people and have conversations on their lives, about the city and much more - if your host is the one who likes conversations. 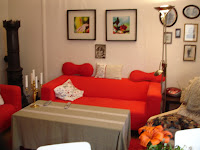 Our host was kind and nice and her house was well done as seen in these pics. There was another couple (unusual pair: a south korean lady and an Indian guy who was more British than Indian) in another room (a tourist just like us). We had limited conversations and co-existed peacefully for the one night we stayed.

We hit the bed early - around 10.00 pm as we had a hectic day seeing all the fjords early this morning and were up since 4 am. The next day was important - we had 13 hours to cover all that we wanted to see in Bergen.

Starting of a brand new day 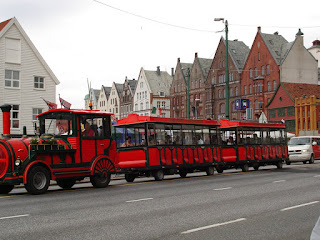 The city was one of nine European cities honoured with the title of European Capital of Culture in the year 2000. And now we know why. As soon as you start walking around the city - you are amazed by the architecture and the "feel of the good old days" that they have maintained. This automobile - in the form of a train chugs past the entire city and is a tempting hop-on hop-off option to visit the city's attractions. We decided to walk around the city and resist this temptation. 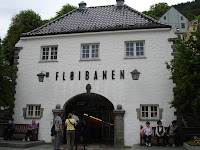 Our first target was to visit Mt. Floyen. It is the most visited of the seven mountains that surround the city centre of Bergen. It has a funicular system Fløibanen that transports passengers from the centre of Bergen to a height of 320 metres in roughly 8 minutes 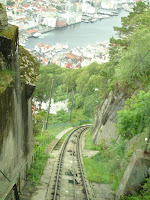 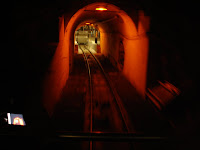 The journey on the Floibanen was amazing. You have to be alert - to not only enjoy the journey and experience, but also to not forget to take these pictures as you start the steep ascend upwards. 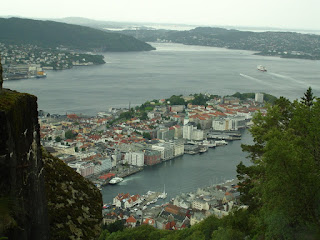 And this is the breathtaking view you get from the top of Mt. Floyen as you are just about to get out of the Floibanen. Amazing view! Try to see the sea and the mountains beyond the first range of mountains (closer to the horizon) - its awesome to see it live!


This pic is the view towards the left hand side of Mt. Floyen. You can see the entire city and the serpentine snake like roads - which at times get elevated onto curvy flyovers.


The walk back from Mt. Floyen
We decided to "Walk like a Norwegian" on the trip back to downtown to enjoy the pristine natural beauty of the forests that we crossed as we climbed down through a defined path. It takes about 30-45 mins and you get a chance to steal good views and pics from the various corners as you descend down. Hehe - and we saw some strange statues and nets and in one of those places - Wifey gave vent to an outburst of being a kiddo! 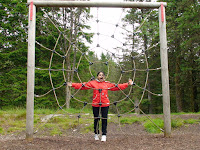 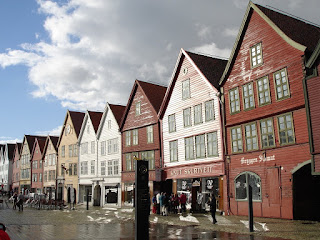 Bryggen, which means Wharf in Norwegian has been the oldest part of the city.Bryggen has since 1979 been on the UNESCO list for World Cultural Heritage sites. Bergen gets rains almost every day in a year. If you are a tourist and manage to catch the sun - you must be lucky. After battling rain in almost all our trips, including this one - we were glad that Sun God smiled upon us and helped us have a good time here. This pic was taken then, 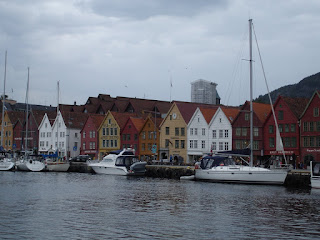 Bryggen as seen from the area behind the famous "Fish Market" in Bergen. Most of these sloping roof houses which now house small shops had been burnt down by various fires that engulfed Bergen in the early years. Some of these have now been preservied. Today, some 62 buildings remain of this former townscape. 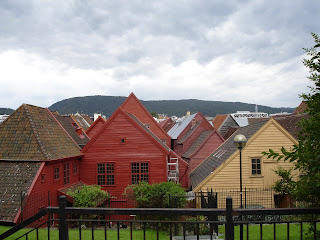 This is the backside of "Bryggen" indeed - very beautiful and scenic. We spent a lot of time in Bryggen as it was so scenic, wonderful to be there.

Around Bryggen - we then walked around to see some other sights like the "Fish Market",  "St. John's Church", "Maritime museum", "Bergenhus Fort", "Smalungeren Lake". 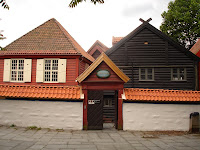 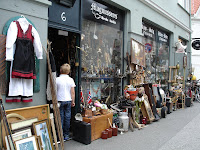 We walked around the city to find a combination of unique architecture in buildings and a mysterious collection of antiques in some of the shops around. 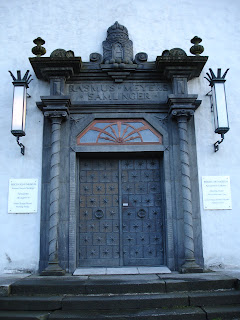 The pic to the left was taken at lake in the city center - Byparken Smalungeren. This is perhaps the door to one of the museums in here. What is more striking is the architecture - especially the top part of the door has a striking resemblance to the Lord Venkateswara Temple top. Will blog on this on some other post though in detail.

The city of Bergen is a city in motion. To the left is the Bergen light rail system called "Bybanen". The first line of 10 kms was opened June'2010, with more to come. 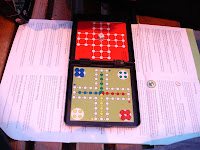 Tired after a pretty long day walking all around the city - we headed back to the Bergen Railway Station and while waiting for our train - caught on a game of "Ludo" in the railway waiting area. Played after ages and reminded of the good old days as kids when summer vacations used to be spent playing games like this. Thanks to the fact that this was a "No Laptop trip" which meant we could take more of the city and the simple pleasures of life than the online world!