When: September 5th, 2010
Where: Rennesoy, Stavanger
How: Local Kolumbus Bus
Who: Myself along with Krishnakumar (KK), Ragish, Raghu and Maju.

All of us were in one way new to Stavanger city. We were no older in this city than 2-3 months. Happened to bond well within a few interactions during "Onam" celebrations at the Malayali Association in Stavanger and outside. It was the last of the sunny weekends in Stavanger, so we thought why not go to some place this sunny Sunday. So based on recommendation from other friends, we decided to explore an offbeat uncommercial location - Renneoy. It is an island that is about half an hour from Stavanger. The exciting part of the journey recommended by our friends-friend was the journey through under sea tunnels. Since most of us were still dreaming of taking the train that connects France to England through an undersea tunnel, we thought this is the best opportunity to get closer to that wish. Also as a place, though there is lot of natural beauty around Stavanger, this was one of the less commercialized - off beat locations that appeared to be interesting to explore.

We met sometime in the afternoon around 3 pm in Stavanger Sentrum and waited for the bus that would take us to Rennesoy. Rennosoy is a municipality in the Rogaland county of Norway and about 30-35 mins by bus from Stavanger Sentrum. Thanks to our Greeen dabba - "Kolumbus", which took us to experience this unique experience of sliding down an undersea tunnel which seemed endless to finally come out of it to climb a curvy flyover bridge connecting two islands, which then again took the next undersea tunnel to finally reach Rennesoy.

To get to Rennesøy ,  the road (also called Rennfast link) passes through  two under-sea tunnels (8,5 km and 6 km long), a concrete bridge and roads to the northern corner of Rennesøy (Mortavika).
The impressive Rennfast link with bridges and tunnels 233 meters below sea level.
In more recent years there has been a program of bridge and tunnel building, which has provided direct road links to many of the islands to the north of Stavanger. One of the most spectacular of these projects is the 'Rennfast' link. This consists of two under-sea tunnels and a bridge. The longest of these tunnels at 5860 meters is the Byfjordtunnelen, which at its deepest is 233 meters below sea-level. At the time of its completion in 1992, it was the world's deepest under-sea road tunnel. The other tunnel, Mastrafjordtunnelen, is 4424 meters long and 133 meters deep. This and other projects have eliminated a number of ferry routes and served to widen the bus net. The best part is you can pass through all these beautiful tunnels in your regular “Kolumbus” bus, enjoying the curvature traced by the bus to go below the tunnel and climb up to emerge out of these tunnels. It definitely makes you remember the tunnels along Mumbai – Pune Expressway. It would be more fun to drive down these tunnels here. Only if renting a car was not that expensive a proposition in this part of the world! 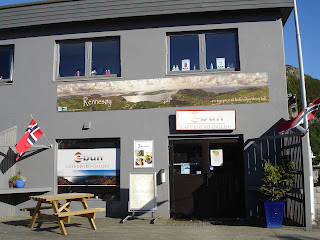 None of us were sure of the stop we need to get down at. After the "this stop" or "next stop" dilemma, we finally were able to get down at the right stop, which was about 2 stops before the last stop. Happy to read the "Rennesoy" signboard. 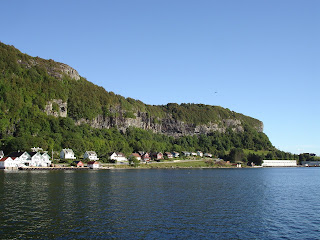 We then decided to look around and walk around a bit to see the scenery around.  It wasn't disappointing at all!'After walking around a bit and finding the entire town almost empty, we found ourselves to be hungry. We entered a nearby grocery store - "Coop" and get some bun and bread for ourselves. 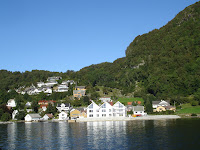 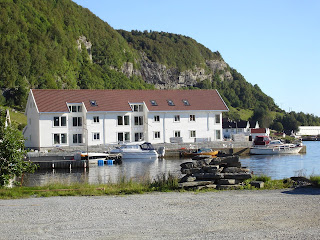 We then entered a cafe under the "Rennesoy" signboard near the bus stop where we alighted and had some coffee with buns n bread. We sat on the outer portion of the restaurant which totally opened up to the scenic view of the Rennesoy mountain and the sea. Was indeed relaxing, enjoying the scenic beauty and doing nothing but sipping coffee beneath the thousand splendid sunrays - as can be seen from the smiles of KK and myself in the pic below! 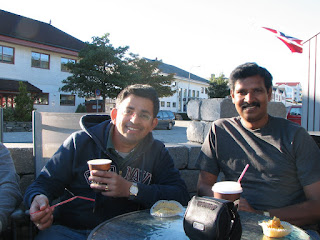 Thats when we saw one of these guys - enjoying the wind by surfing amongst the clouds, enjoying the scenery of the mountains, sea and the birds like no one else would have - barring god at that time! 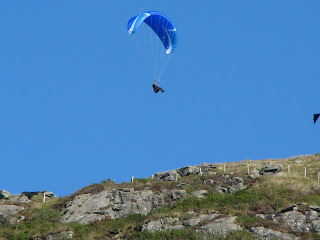 And while all our heads were up trying to trace the path of this guy floating in the winds, what brought us down was the small boat with a UK flag that got parked around the docks. The sailor and his girlfriend disembarked and were immediately met by their friend - the lady in blue who had driven down and almost was to drive onto the sailor's boat. We caught this pic for multiple vested interests in the background - but what came out well was our intentions channelized through Ragish's expressions in the foreground as well! The evil in me wants to use a sketch pen to draw a small heart around the two ladies in the background and cut an arrow across to Ragish's head as if to show the thoughts in this mind :) 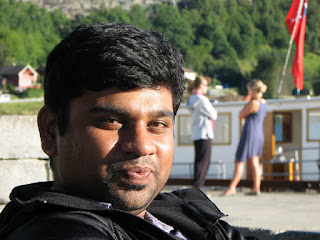 Then began our long walk to the bus stop after we figured out the right bus stop. The next bus was in 15 mins and if we managed to miss that we had to wait in the middle of nowhere for the next two hours for the last bus to arrive. 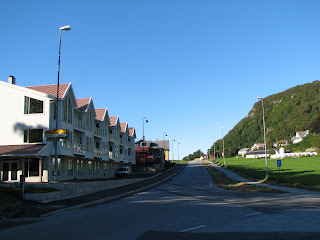 It was about 6.00 pm when we started the walk up to the bus stop. And once we reached there, had this group snap


This trip did clear one thought which has stormed my thoughts for long. What is it so different about an Under sea tunnel ? Does water gush out onto you once you enter/ leave the tunnel? Is it any different that going through tunnels under mountains / railway bridges? Answers to all this is - there is no difference and no - water does not gush out. All the time you just fear that you may drown and die if the tunnel collapses as you would really be "under the water"!

We looked back to get a last glimpse of the mountain and the water at Rennesoy and this was last etched on our minds, before we again wriggled through the tunnels sitting in the "Kolumbus". It was indeed a very relaxing trip - no noise, no people - all of nature's beauty just for ourselves. And my mind began to subconsciously sing the hit John Denver number "Country Roads...take me home, to the plains.." 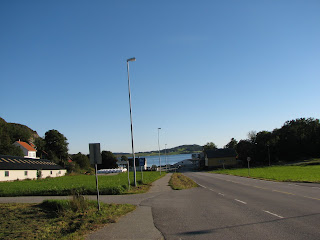 Wonderful read! Waiting to read many more such travelogues..

Nice .. makes me want to take trip to Norway

hey deepak. This is real good stuff. Never read a blog b4, but u have great talent of getting the reader hooked. I have no doubts that u will go on to be a great writer some day. I have seen numerous catalogues on Stavanger tourism but none describe the beauty like u have by just visiting rennesøy. I would love to read what u write when u visit Priekestolen and Kjerag.

@ Wifey, Ragish, KK, Vishal - Thanks for the feedback folks!

@ Namesh - Thanks for the feedback bro! Will add on Priekestolen and Kjerag as soon as we visit it, hopefully weather permitting! Some day i want to also write on the dance step that was so amazingly performed by you! Hats off to you!