When: Saturday, July 31 2010
Who:  Wifey and I
Where: Three Swords , Stavanger, Norway
How: Bus from Stavanger Sentrum to Madlasandnes followed by a long walk.

It was less than a week since we moved into Stavanger. We had shifted to our new house and settled ourselves by unpacking the tonnes of card board boxes. It was the last weekend before wifey travelled back to India, so we thought why not make the most of it? Used google and the local bus map to set our short on-the-spur-of-a-moment planned trip to see the Three Swords.

The Three Swords (Sverd i Fjell) stand on the edge of Hafrsfjord, 6km from the centre of Stavanger. There are various ways to get there. We chose to take the local "Kolumbus" ( a la BEST in Mumbai paralance) bus. We ended up getting down at the last stop and had to walk back for almost half the distance the bus convered from our house to the last stop! It was drizzling a lot (nothing new now that we think of UK, Denmark trips when it poured crazy!). So armed with an umbrella to wade those drizzles, a smile on our face and some self motivation to walk back - we clicked some pics on the way.

There were nice long lush fields in yellows and greens as we walked back to the 3 Swords as shown in pic . Reminded us of all those silly movie songs! 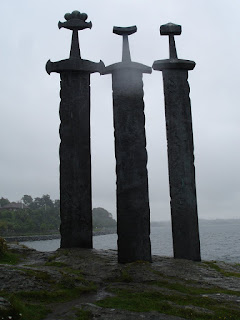 Finally saw the 3 Swords and were delighted seeing them! This pic has a very mystic effect like that seen in the Harry Potter movies. This monument is apparently a famous backdrop of lot of wedding ceremonies in Stavanger. This monument was unveiled by King Olav in 1983 and commemorates the Battle of Hafrsfjord in 872, after which King Harald Fair Hair united the three districts of Norway into one kingdom.The crowns on the swords represent the different districts which took part in the battle. 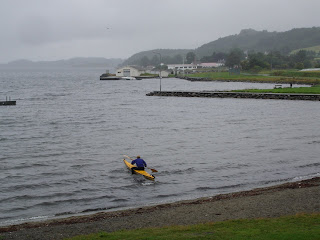 As we turned back and started walking back to the bus stop,we saw this man who venturd out into the sea on his kayak, though it was drizzling like crazy and the sea was a tad rough. Perhaps he wanted to prove the age old adage of "Time and tide waits for no man" wrong and rewrite it as "Time or tide or rain, i can tame them all"! No wonder Norwegians are the Vikings, who tamed the sea and exploited its potential to the fullest over centuries!
The parting shot has to be in "Sepia" mode of the Sony. It is just wonderful and makes the pics look so good!
Travellers tip in Stavanger: If you are taking the Radisson Blu Airport Express Bus from Sola Airport towards Stavanger Sentrum, remember to sit in the line of seats which are behind the Bus Driver. You can then catch a glimpse of the 3 Swords clearly! While travelling towards Sola Airport sit on the other side of the line of seats where the bus driver is seated
Posted by Atreya rocks at 12:39 AM

Gud read.. made me rewind to our sweet memories in Stavanger before I left back to India...

I'll be visiting Stavanger next july. Planning on walking the distance from Clarion Hotel to the Swords. Hope to cover it in 60' (one way)... tnx for the tip!

Nice pictures :)
I'm from Stavanger, but have never been there (except for driving through) ...
Guess I will have to take my kids one day soon :)