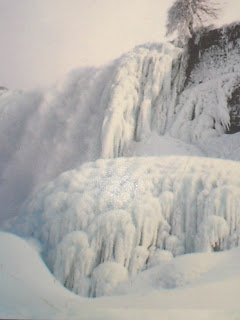 At times, life throws challenges at you that overwhelm you so much that you are shaken and in dire shock..almost frozen with inaction. During such phases, the least you can do is not let yourself down. Keep your calm and carry on. This too shall pass.

1. This pic was taken in Niagara Falls, United States of Amercia (USA) in September 2005.

2. The pic depicts frozen Niagara Falls. The Niagara Falls was frozen probably once in its entire lifetime. But nevertheless that too passed and it continued flowing...making it one of the most ferocious and equally beautifull waterfalls the world over.
Posted by Atreya rocks at 6:01 PM

@Deepak
Was this picture that of only of a section that was frozen. I think there is only one time that the falls completely froze over and certainly not 2005.

Nevertheless - good thought to go with it

Hi Sandy,
Yes...you are right. Probably only a section. It was frozen much before 2005. I took the pic during my visit in 2005. Its actually pic of a pic displayed there.