Continue doing “your thing” if you believe it is right, even if others are not watching.
Someday somewhere, the moment of truth would strike – for you or for them! 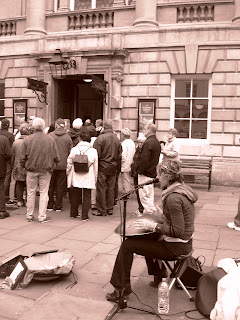 1. This pic was taken during our trip to the City of Bath ,just outside Roman Baths - the most famous tourist attraction in this city. This city was inscribed as a World Heritage Sight in 1987.

2. The lady playing this instrument in this picture was looking very composed and confident of her capabilities. The sound was very pleasing to the ears amidst the tourists and the delicate carvings and architecture outside Bath Spa. The lady had also kept a CD of her music near her collection basket (used to attract small change from passerby's who like the music), which one could purchase for £5.

3. The city of Bath was first established as a spa with the Latin name, Aquae Sulis ("the waters of Sulis") by the Romans sometime in the AD 60s about 20 years after they had arrived in Britain (AD43), although oral tradition suggests that Bath was known before then.They built baths and a temple on the surrounding hills of Bath in the valley of the River Avon around hot springs.Edgar was crowned king of England at Bath Abbey in 973.Much later, it became popular as a spa town during the Georgian era, which led to a major expansion that left a heritage of exemplary Georgian architecture crafted from Bath Stone
Posted by Atreya rocks at 2:06 PM

Nice.
Really love the concept of PicMotivate.
Looking forward to what's coming next.

Good Deepak, you are back at blogging in a good and interesting way. Keep it up and keep them coming..

@Vishal, Rajesh - thanks for your encouragement friends. Will try to live it up! BTW - both of you are obsessive bloggers who have motivated me to get back active on this one! Owe it to you friends!