India: A trek to Tirupati Temple: A spiritual sojourn

One of the destinations that i have re-discovered in the last decade (since i had been there when i was barely 2-3 years old) and love to go to is Lord Venkateshwara’s temple at Tirupati, Andhra Pradesh in India.  I am at complete peace with myself and surroundings while in Tirupati.   In the last 7 years, by the grace of Lord Venkateshwara’s willingness i have had an opportunity to be there more than once, and i humbly look forward to emulate the record in the next decade. However, till i breathe my last, no matter how many times i go to the temple, i will still feel it’s less. Every time i go there, i discover something new and see myself more relaxed.
The sacred and one of the ancient temples of Sri Venkateshwara is nestled in the verdant Eastern Ghats - a mountain range that runs along south-eastern India. These hills are called as Tirumala Hills and are 3200 feet above the sea level. It comprises seven peaks, namely, Seshadri, Neeladri, Garudadri, Anjanadri, Vrishabhadri, Narayanadri and Venkatadri, representing seven hoods of Adisesha, thus the name Sheshachalam. The lord here is called with many names like Edukondalavada, Sri Balaji, Srinivasa, Venkataramana Govinda, Voddikasulavada and many more. The main temple (Abode of Lord Venkateshwara) stands on the seventh peak, Venkatadri and lie on the southern banks of Sri Swami Pushkarini. It is by the Lord’s presidency over Venkatadri, that He is called as Venkateshwara. According to Shastras and Puranas, it is said that one can attain mukkti (Salvation) after worshipping Edukondalavada, meaning, the Lord of Seven Hills, in Telugu.
In fact, if you stand on the long serpentine queues to take “Darshan” of the Lord, folks keep passionately chanting “Edukondalavada venkataramana govinda govinda”. The mere chant of this mantra is enough to bring down the exhaustion brought about by being standing and being pushed around in huge crowds for over 3-4 hours that ultimately wins you that 5 second glimpse of Lord Venkateshwara in the sanctum sanctorum.  And believe me, it just takes one person to chant it out aloud while standing in the long winding queues, and all other devotees are enthusiastic to give the background chorus repeating after you. The devotees come from all walks of life, from destinations near and far to have that one glimpse of the Lord who eases most of the hardships they may be having in life. They are willing to go to the extent of not only offering donations in the form of currency, gold but also give away the hair on their scalp through tonsure. It is considered very special to tonsure your head in Tirupati, which literally signifies the greatest offering. The hair on the head gives the ultimate beauty to human beings, and if you are willing to offer that which gives you beauty to the Lord, then there can be no greater offering than that. Devotees in need of the assistance of the Lord, usually take a vow and when they visit the temple, offer their hair at the Kalyaanakatta, special hall erected for this purpose.  After having a bath, they then stand in the queues for the Lords darshan.
There are many types of sevas and darshanam's which can be made in the temple. The darshana begins at 3am in the morning and ends at 12pm in midnight. It takes around 3-4 hours of waiting in the queue for either darshan or paid darshan. Every devotee is issued a computerized token, at Venkateshwara Bus stand, Padmavathi Bus stand or at the entrance of Tirumala, with approximate time to enter the queue complex. This system facilitates to know one's turn for darshan. For everything, the bookings have to be made well in advance.
To reach the temple or the Venkatadri hill, one can take Jeeps / state transportation buses / private cars from Tirupati Railway station. It is a very commercial place with no dearth of means to reach the hill.  However, if you are the one, who wants to soak in more of Tirupati, and its ambience, it is best recommended to trek “Tirumalai” to visit the Lord.
This trek is not through a calf path, but through properly man made steps (exactly 3500 steps) that start from the bottom of the hill at a place called “Alipiri”. Ensure that before you begin the trek, you take the computerized token in the booth nearby, so that you know your approximate time for darshan. Without the token, you would not be allowed for Darshan. There is also a queue for this. For all the “Seva’s”, the booking is done in advance through the internet. 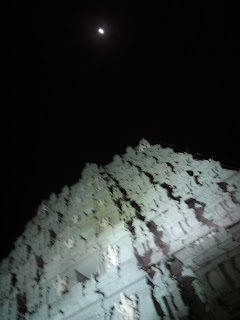 Once you have your computerized token – usually, in the form of a plastic wrist band with the time of the darshan written on it, you can start climbing the steps. Throughout your journey of 3500 steps, just like life’s ups and downs you find the steps spaced over at different intervals and altitude levels.
These steps criss-cross through some beautiful mountains and scenery including a small park, where there are a lot of Sambar Deers. One can buy grapes, carrots and other things from the nearby vendors and feed it to these Sambar Deers. They seem perennially hungry, no matter what time of the day it is. Always eager to fight amongst themselves by using their horns to get even that small grapes that slips in between the rocks. Nothing can be as relaxing as wiping down your sweat watching these deers watching you with an expectation that you would feed them something. I usually try to spend time angling the grapes across a cross section of these deers so that only the strongest of them is not the recipient of my grapes. 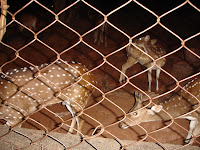 The entire stretch of 3500 steps also has shops where one can have light refreshments for eating and drinking. If you observe the surroundings, your mind will begin to construct the mythology of those times in your mind and appreciate the human interventions to make this ancient temple located on a highly inaccessible terrain, accessible through this properly defined path. You will see fellow devotees, who have taken a pit stop to catch their breath, some who light small camphor tablets with fire on each step or some who are happily chatting with their family and taking the stairs.
These days some also carry mobile phones and transistors and play loud devotional music while ascending / descending the steps. The climb of 3500 steps takes about 3 – 3.5 hours to complete with adequate breaks in between. For the last three times i have been to Tirupati, i have always climbed the steps before the darshan. Especially the last two times i was all by myself while doing the trek and it was enjoyable. The path way through steps is well covered, so that even if it rains or the sun is harsh, it is still cool and safe to ascend / descend with no issues. There is only a small stretch where you get exposed to the highway and have to walk on a footpath for close to a kilometer, but now even that is covered with asbestos sheets. 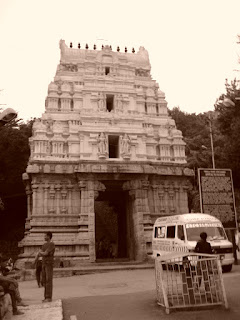 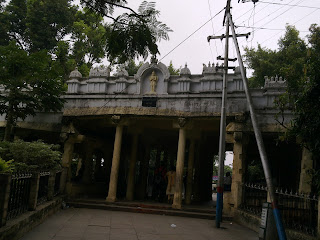 You pass through intermediate numerous checkposts like these, where one can sit down and relax before beginning the next step of ascent. 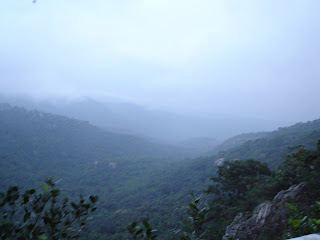 You can steal some good views of the surrounding mountains, a windmill as you walk through the footpath. 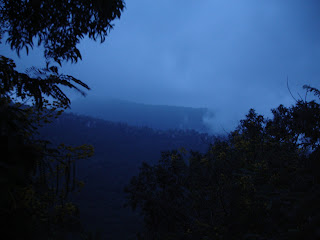 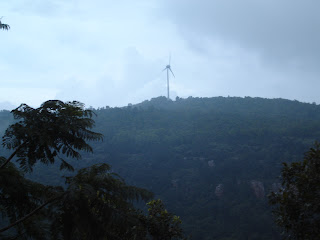 There is also a small temple along the road on this path. 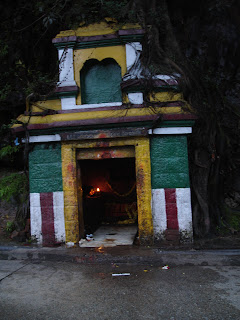 As you reach closer to the 2700th step, there is also a gigantic idol of Lord Hanuman, where devotees take a pit stop. 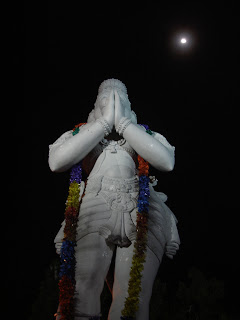 As you reach the final step, there is yet another ceremony of putting vermillion, turmeric, lighting camphor to mark and end of the trek and begin the walk towards Lord's darshan.

Captured the pic below in the wee hours of the morning - between 3 am and 4 am. It symbolizes Lord Venkateshwara, with the conch shell (to the right of the three lines) and the chakra to the other side of the three lines. The three lines signify Lord Vekateshwara. This is similar to the patten seen in the blog on "Pattern Matching Conundrum". Click here to read that blog. 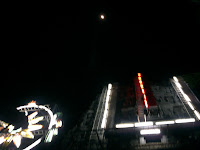 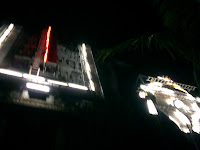 As you walk along and near the end of the 3500 steps, you would find a lot of "Alwar's" line along on either side of the path with their statues and significance in the mythology explained in English, Hindi, Tamil and Telugu languages. The alwar( meaning ‘those immersed in god’) were Tamil poet saints of south India who lived between the sixth and ninth centuries and espoused ‘emotional devotion’ or bhakti to Visnu-Krishna in their songs of longing, ecstasy and service. Sri Vaishnava orthodoxy posits the number of alvars as ten, though there are other references that include Andal and madhurakavi, making the number twelve. The devotional outpourings of Alvars, composed during the early medieval period of Tamil history, helped revive the bhakti movement, through their hymns of worship to Vishnu and his avatars. The collection of their hymns is known as Divya Prabandha and is considered equal to the sanskrit body of work called vedas and related revelatory texts, detailing knowledge of Nature, God and the relationship between the two.

The trip/ trek to Tirupati is indeed very enjoyable, tiresome, full of introspection and with rich glimpses of the ancient Hindu mythology, that make it so endearing to go there again and again - not by car / bus - but by climbing the steps and soaking in the ambience and coming in terms with yourself and your existence.
After this, your  endurance will be tested further as you will have to stand in the Queue in Vaikuntam Q-Complex for 3-4 more hours amongst pilgrims from various walks of life, unanimously chanting excitedly "Edukondalavada venkataramana govinda govinda" in short bursts to get that one glimpse of the Lord for five seconds, who eases away all your problems. Those five seconds with the Lord - make any effort, trouble you take to reach this place seem very insignifcant.

An ardent devotee of the Lord tht u r, i m sure there must be much more to the darshan than what u have penned.. I hope ur wish of seeking the feet of Lord Venkatesa continues year after year.. and I hope and pray that also get HIS blessings and be able to join you for the darshan whenever u go!

Nice to see your writing

Belief is Bhakthi;and the belief comes through one's own experience.
Share your or your friends' experiences and that will spread the message

I have done angapradkashinam three times in Tirupathi. When I di the first time I was apprehensive once I started,I realised i roll not on my efforts but roll without any effort. In fact when my mother at her eightieth year climbed the hill barefooted( I remind you she was blind then) and said she would do angapradakshina the next day morning all were worried But she did it without any issue. It is the Belief that transforms into Bhakthi and Bhakthi ensures Gods grace

Good job and keep it up

@ Wifey - Thanks da. Sure we will go there together the next time!

@ Sankar Chitappa - Totally agree with you. I am moved by reading about doing angapradakshinam. Thanks so much for your encouragement.

@ TCI - True. Thanks for your comments!