Think Ahead, do not brood over the Past!

The car windscreen in the front is always bigger than the rear view mirror or the rear windscreen. This is to ensure that you look ahead more clearly than behind. Don’t brood over the past. Pick up the learning`s from your disappointments and failures and look ahead with new rigor, energy and enthusiasm! 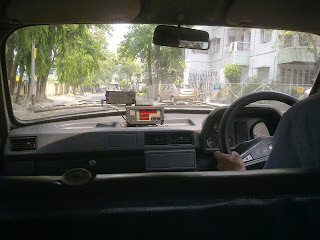 About this pic:
1. This pic was taken inside a Taxi while i was in Kolkata, India in August 2012.
2. My work takes me to this magnificent city in the eastern coast of India quiet often. Kolkata is a a blend of modern world with the old world. The city never amazes to give you a feeling of being in the 21st century and simultaneously being in the British era or even before that (which was centuries before).
3. Most of the taxi drivers in Kolkata are people from neighbouring state of Bihar. Bihar's political climate and job opportunities have forced people to look outside of their home state for their daily livelihood since years. However the scenario is now changing with a stable government and pro development mindset from the current Chief Minister of Bihar - Mr. Nitish Kumar. Years down the line it would be interesting to see who takes up this vacant seat of a taxi driver - the intellectual Bengali or the hardworking Bihari!
Posted by Atreya rocks at 9:17 PM