There are not many commercial tourist attractions in Oslo which are really “must see”. Though Norway and the area around Oslo is richer than most parts of the world in pristine natural beauty, the city is still kind of working on its share of world famous man made landmarks which are usually famous around the world – like Big Behn, Eiffel Tower, Leaning Tower of Pisa etc.  One of the places that would potentially come to identify the city with its towering shape and structure is the Holmenkollen Skii jump.
Getting there:
To get there, one has to take a T- Bane (Metro) from Oslo Sentrum to Majorstua. From Majorstua there is usually a combination of T-Bane + Bus that needs to be taken to get to Holmenkollen. Holmenkollen is just 2 stops before the last stop Voksenkollen, which is famous for skiing during the winter months. Currently the Norwegian government is busy building infrastructure (T-Bane’s that will directly take you up the hill till Holmenkollen from Oslo Sentrum) in preparation for the 2011 FIS Nordic World Ski Championships that this ski jump would be hosting. In general the journey is about 45 minutes from Oslo Sentrum. This was the last place we saw in Oslo on July 25th 2010, before we left for Stavanger. Being a rainy and cloudy day, our plans to go to Bygdoy island to visit the Norwegian Culture museum were cancelled. So we chose Holmenkollen and indeed were not disappointed - neither by the weather and nor by the place.
Holmenkollen Ski Jump:
The Holmenkollen ski jump, is host to the world's second oldest notable ski jump competition still in existence.Every year, more than a million tourists visit the ski arena.One has to walk along the gravel path around the base where the skii jump ends and circle along a small hill to reach the first base. If one wished to go up further till the start of the skii jump, there is a small 4 compartment train attached to the back of the ski jump, which can take one to the top for a panoramic view.


The capacity of the stands is 50,000 spectators.
The tower offers a panoramic view of Oslo and the Oslofjord. It is indeed scary and at the same time magnificient to adore the slope of the skii jump, the great height we are at and the scene of the Oslo fjords and water beyond.
Today's tower extends 60 meters above ground, and 417 metres above sea level.The first time it was used for skiing was in 1892, after which this slope was built multiple times to be what it is today. In fact in the early days, during winter the Norwegian King used to take the "Tram" to come till Holmenollen for skiiing, along with the normal public. It is indeed heartwarming to see the down to earth nature of the Norwegian Royal family. There is a picture of the same in the Skii museum which accompanies the ski jump during one such trips of the King. Around this area, we then sat down and had some lunch packed from home - sambhar rice, curry and curd rice. I also had a beer to wash all that spice down. Be it US, UK or Norway - you can never take the curd rice out of the South Indian!

Blasted out of the bedrock beside the Holmenkollen jump is the Ski Museum. The world’s oldest museum devoted to skis and the history of skiing with its exciting exhibitions. It is owned and administered by ’Skiforeningen’ (The Association for the Promotion of Skiing).

The Ski Museum illustrates 4000 years of skiing history with rock carvings, skis from the viking age.Once can also not fail noticing the contribution of the Norwegian Royal Family to turn Skiing into a positive sport for the people of Norway and celebrate it as an occasion to go out with your family and enjoy the snow through skiing. Before such an initiative, the harsh climate in Norway with snow all around and the fact of using skii's were not welcomed well or looked positively. Norway infact has had soldiers who have used ski's to patrol through the rougher and inaccessible part of the mountains, with a gun in their hands. There were also lot of skii exercises demonstrated in pictures for these soldiers. This way of harnessing nature is indeed a positive way of overcoming the obstacles that the nature can bestow on different geographies around the world.
Some of the other peculiar artefacts in the skii museum were also the different varieties of ski's that have evolved over the years, the various miniature models of Holmenkollen, showing its evolution over the years as a skiing place. It also shows one of the world's first ski maps, the skiing kits of the Royal Family of Norway and also ski's designed for horses of all the people!
Skis from various parts of Norway show local handicraft skills and traditions. 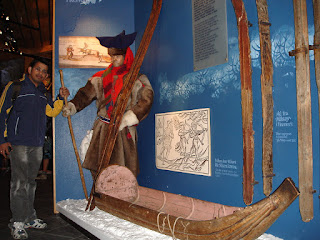 In Holmenkollen there is a simulator in which visitors may experience for themselves the heart-stopping thrills of ski jumping and downhill racing. We refrained from doing that as we experienced the thrill of ski-ing much better in the winter of 2009-10 when we did cross country skiing for the first time in Voksen Kollen. Also there was a long waiting period for the simulator (which were limited in numbers - 2), which made us to wrap up our short trip and take the bus + T-Bane (Metro) back home.