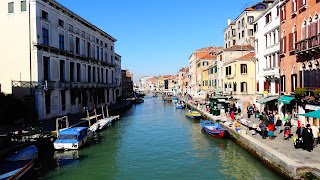 One of Italy’s most visited regions, Veneto in the country’s northeast was independent for centuries until 1797, when Napoleon invaded. It then bounced among French, Austrian and Italian domination. Bordered by some of Europe’s most beautiful elements (the Adriatic Sea to its east, Lake Garda to its west, the Dolomites to its north, and the Po River to its south), Veneto is known for agriculturally rich valleys flowing down from Alps and for important cities like Venice, Verona and Padua.

Venice, unarguably is the jewel in the crown of Veneto. Venezia, as it is known in Italian is an archipelago sited on a group of 118 small islands separated by canals (177) and linked by bridges (409). You will not even realize you are treading over these smaller islands as you enjoy Venice on foot – climbing through one of those 409 bridges and criss crossing across the calle’s. The canals serve as the highways for Venice and can be tamed by Vaporettis (water buses), Gondolas (private boats), Private Water Taxi’s. The other option is to walk across this island and soak in its mesmerizing, rustic and colourful charm. Venice is no wonder Europe’s largest urban car free area. Though there is a train station and bus station and other connections to mainland, major part of Venice is still best covered on foot or by water transportation. 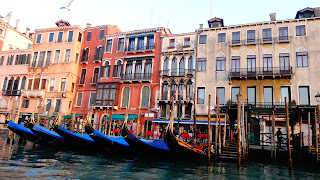 It would be criminal waste of money and time if one doesn’t visit Italy, while in Europe and most of all rule out Venice in his trip. A lot of folks do cover Rome and Venice as separate trips (of 3 days each) from the UK/ other countries – but makes sense to combine it all Rome+ Pisa+ Venice (and if you have some energy a dash of Florence) to soak in as much as you can of this wonderful country!

Some of the best experiences/ things to do in Venice:

1. Grand Canal Tour: The Grand Canal/ Canal Grande’ is Venice’s main canal or the main superhighway for its water transportation. It is like the Motorways (M) of the UK or Interstate (I) of the US. The Grand Canal has the Santa Lucia railway station on one end and Saint Marks Basin at the other end. A good idea to do the grand canal tour is to take vaporetti No. 1 starting from the stop outside Piazza Roma or from the Santa Lucia Station all the way upto St. Marks Sqaure. Many tourists also explore parts of the Grand Canal by gondola. 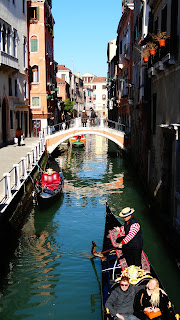 As you cross the Grand Canal, you will pass through over 170 buildings on either sides – which have been built anywhere between the 13th and the 18th centuries. It`s a colourful and busy spectacle. 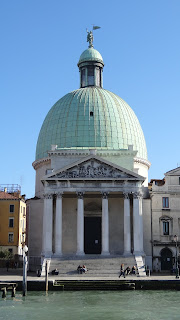 The gondola’s, vaporetti’s and other modes of water transportation add a dash of life to this colourful spectacle. You will definitely step back in time as you go through this scenic tour and remember that while you experience your journey, you are experiencing a journey which has not changed much in the last few centuries except for the noise! 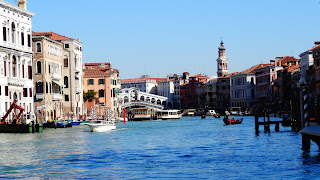 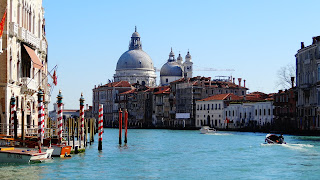 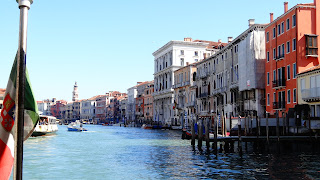 The Grand Canal tour is recommended not only during the day, but also in evening and at night – when the lights come out and bring a different sense of spirit and mystery to this wonderful city.

2. Island hopping to one of the lagoon islands – Murano, Burano or Torcello: If you want to escape the crowds of Venice and go to smaller offbeat locations – escaping the crowds, enjoying a longer ride on the vaporetti and soaking in the blues of the water and architecture of the Venetian churches, buildings from a distance – this is the best thing to do. 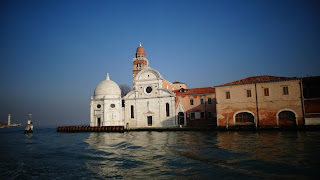 Murano island has long been famous for the Italian Murano glass. Many of its glass factories offer tours and demonstrations. We decided to skip this as we had our share of museums in the last two weeks across Paris, Rome, Vatican City and Florence!

Burano island is a 40 minute boat ride from Venice (by vaporetti no. 12) and more interesting of these three. I did enough reading on the internet the night before we covered this part of our Venice itenary and was blown over by this tiny island – with its brilliantly painted houses. When we visited this island, we enjoyed our time here totally. This island is famous for its traditional handicraft – gossamer-fine lace and also has a school for lacemaking! Thi island also has a leaning tower (just like the Leaning Tower of Pisa) – which now i call the Leaning Tower of Burano! 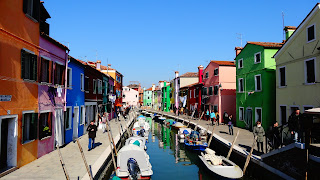 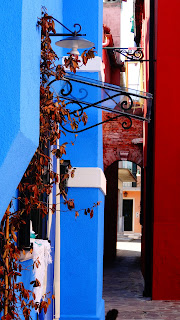 If you travel 5 more minutes beyond Burano, you can reach Torcello, which had Venice’s earliest settlement. However a malarial outbreak did decimate the population of this island some years back, but it still has some amazing churches.

Your vaporetti pass (which is typically valid for 12 hours, 24 hours, 36 hours and so on) also covers visits to these islands. So you cover these at no extra cost!

3. Gondola Ride: Venice is probably most remembered for a Gondola – the famous Venetian boat, with a boat-clad Gondolier manoeuvring it through the tides on the Grand Canal as one enjoys a romantic moment with his partner. Thanks to movies, travel documentaries and the lure for feeling romantic amongst the minds of our wifes and girlfriends, this is one ride; you would as well do once in your life time! A gondola ride can typically cost average of 80 Euros or upwards for about 40 minutes depending on the time of the day and mood of the gondolier! We negotiated this fair price (which is still expensive) and were one of the last customers of our Gondolier, who was known by the name of Thomas. Thomas was not one of the chatty gondoliers unless he was provoked onto a conversation (thanks to the inquisitive me), but a professional at his job. He made our ride enjoyable and helped us experience the sunset on the Grand Canal and the narrow canals of Venice with some deft manoeuvring of his Gondola. One of the famous songs - Do Labzon Ki Hai from the Bollywood movie The Great Gambler starring Indian movie star Amitabh Bachchan is shot in Venice. They did have a Gondolier who sang some of the verses of this song in Italia, which was indeed soothing! I wish Thomas could dish out something similar in those 40 minutes! 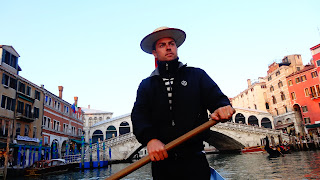 4. Famous Bridges of Venice:
Venice is also known as “City of Bridges” as it is home to over 400+ bridges criss crossing and connecting the 100+ islands in this beautiful and mystical archipelago. Some of the famous bridges of Venice span across the Grand Canal and you would pass through them as you take the Grand Canal Tour. There are four such bridges - Ponte di Rialto, Ponte dell'Accademia, Ponte degli Scalzi and Ponte della Costituzione

The most oldest and famous of these four bridges is the Ponte di Rialto or Rialto Bridge. As you can see, it looks equally splendid – day or night. It has been standing there, since 1591, a little over 430 years!

Ponte della Costituzione is the most recent one commissioned in 2008, which connects Santa Lucia station to Piazzale Roma Bus Terminal area – amid protests by politicians and general public. Though this bridge is required for ease of access to the bus terminals and the wider mainland from the Venetian island, it has been an eyesore as compared to the other beautiful bridges.

Rest is covered in the next blog! Time for a break :)
Posted by Atreya rocks at 9:18 PM

Just a quick noteI wound up going with a dark black/brown counter. I will post photos in a later update.
michelangelo marble

Gondola ride in Venice is the most important experience each one should feel.
Famously built on 117 tiny islands, Venice is linked by more than 150 canals and 400 bridges..I would proudly represent Venice city as the gem of the world because here you get a wonderful experience to stay on water.
Take your family for a long trip to Venice and make her life exciting.

Amazing pictures! Takes me back to a food tour I took in Naples. They took us around to every authentic eatery I could think of, and we feasted on fish, pasta, pizza, and some amazing desserts. I can’t wait to go back again one day.