Vatican City, Sistine Chapel
Vatican City is the world’s smallest independent state! With an area of approximately 110 acres and 800 people – it absolutely has to be! Italy in fact is one of those countries which have 2 smallest countries in the world – Vatican City and San Marco. You will know you are in Vatican City by seeing the walls around the city. The Vatican Museum, Sistine Chapel and St. Peter’s Basilica are all inside the boundaries of this Roman wall.

One can stay in Roma Central (near Termini station – the central station in Rome) and plan to travel to visit Vatican and old Rome easily. We took the Metro Line A (heading towards Battistini) to go to the Vatican and got off at Cipro Musei Vaticani. From Cipro station, its about 10 minutes walk to the Vatican Museums. 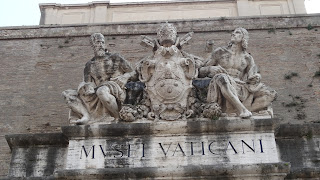 The first place was Vatican Museum – one of world’s greatest museums, since they display great works of art built over centuries in the form of paintings, sculptures and other forms. With stalwarts like Michaelangelo and Raphael putting their life’s best efforts to paint frescoes and “The Last Judgement”, this museum will leave even the most naive art follower spell bound. 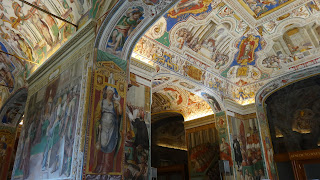 If I compare visiting the Vatican Museum to the other great museum – The Louvre, in France, I would rate visiting the Vatican Museum less tiresome  – though its much more bigger than Louvre. This is because visiting the entire Vatican is like walking on a train. You can walk from the engine to the rear of the train via the compartments and vestibules – one after the other in a sequence – you have no other option. In Louvre – a lot of times you enter a specific segment or area and you need to walk in, walk back on the same path and then search a different segment to explore. So your legs ache, camera battery cries as you see the same things again as you walk back to your starting point.

We had not opted for the “Roma Pass”, but chose to book tickets to Vatican Museum online. It was a breeze to collect actual tickets, take an audio guide (believe me it enriches your experience further) and start our tour. We would have spent a tad over 3 hours in the Vatican Museums and Sistine Chapel and along all this time – were totally in submission to the intricacies of the masters who have created these museums.

Some of the very interesting works we liked were – Gallery of Maps, Paintings by Caravaggio, Stanze di Raffaello ("Raphael's rooms"), the various frescoes in display and more importantly –Sistine Chapel with Michaelangelo’s ceiling frescoes really enriching the experience. “The Last Judgement” on the altar wall of the Sistine Chapel – again by Michaelangelo will blow your mind away. There was so much of artistic richness and grandeur during the Renaissance period brought about by the trinity of Michaelangelo, Raphael and Leonardo da Vinci. It pains to see that our current generation has succumbed to be entrapped by the Television, Table computer, Mobile phone and other vices that probably stops us from choosing a hobby and pursuing it with blood and sweat!
Don’t also miss “The Last Supper” – a woven carpet depicting the same. This is the near perfect replica of the original painting, which is in Milan. You should spend sometime soaking it in.
If you still have energy and enthusiasm to absorb more of the art and history – do visit the Pinacoteca Vaticana – which is an art gallery with very nice paintings including one of Adam and Eve in Garden of Eden by Peter Wenzel– which has more than 200 animals in the painting – all drawn to the perfect detail and depth and would seem as if the painting would come to life with a passing breeze.
In addition visit the Museo Pio Cristiano in the Vatican Museum – which gives a lot of sculptures and artefacts excavated in Rome. A lot of the remains are also of ancient Greeks probably.
Once you are through the Vatican Museums, you will be rewarded with a visit to Sistine Chapel – which is just before the exit of the Vatican Museums. Do ensure to spend sometime in silence without your camera adoring the beautiful chapel and the works of art on its walls and ceiling. Apart from the works by Michaelangelo and Raphael – also note the walls – which have pictorial depictions of the Stories of Moses, Stories of Jesus, Resurrection of Christ.

There are enough cafe’s inside the Vatican Museums for you to try some Pizza, Crepe or other items on the menu – and yes in Italy, you will never be short of Vegetarian options!
And as you walk out of the Vatican Museum, climb down the set of stairs as shown below. These were designed by Giuseppe Momo in 1932. These are one of the most photographed in the world, and certainty one of the most beautiful. The broad steps are somewhere between a ramp and a staircase.The stairs are actually two separate helixes, one leading up and the other leading down, that twist together in a double helix formation. Little did the Vatican Museum know in 1932 that this formation would come to represent life itself, with the discovery of the double helical DNA strand. 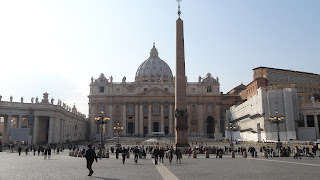 The Saint Peter's Basilica, is a Late Renaissance church located within Vatican City.It is one of the most famous pieces of work of Renaissance Architecture and is one of the largest churches in the world.It is one of the holiest Catholic sites and famous for pilgrimage for a lot of Catholics from around the world.The Saint Peter's Basilica is not only mesmerising from the outside - but when you head inside, you will loose yourself in its glory, brilliant serenity. Spend atleast an hour or two inside (if not more) soaking in each section of this marvel. Michaelangelo's original sculpture of "Pieta" - where Mary holds the body of Jesus after crucification.

Also, don't miss Bernini's baldacchino, a pavilion-like structure 30 metres (98 ft) tall and claimed to be the largest piece of bronze in the world. This is right before the Papal Altar in the sanctum Sanctorum - black in color. My reading indicates, the bronze for making this baldacchino was taken from the Pantheon - another beautiful building in ancient Rome.


Try to see every aspect of St Peters Basilica- the long walls, high ceilings, the frescoes, paintings - everything has been done perfectly to the tiniest of detail.

We had visited the Vatican and St. Peter's Basilica on Feb 28th 2013, and were one of the privileged to be near the Pope Benedict XVI on his last day on the job. We saw him on wide screen (though he was hardly 800 meters away from us) and waved him goodbye with the huge crowd as his helicopter flew above us. A divine experience for sure!

Please spend 4-5 hours in Vatican City - it will be an enriching experience. Post that in the evening you can plan to visit one of the fountains (we had visited Trevi Fountain), see Colosseum at night (it looks brilliant!) or walk around Rome.

They say - Rome was not built in a day and i am sure you will not regret this one day in Rome - especially the Vatican City.

Deepak, you rock!!! WOW is an understatement expression..
I got so lost in reading both your articles on Italy that I didn't realize how time flew...
You have written it so well.. that I'm greedy now to read all your remaining days of Italy experience..
Please post that soon, too...
Eagerly waiting for the next one..

Thanks dear! Hope this helps in your trip planning. Of course - any questions you can reach out to Meena or me. Cheers!

Thank you for such informative blog. This is really nice we would be glad if you share similar experience with us please click on Europe tour packages