Rome is one of the most ancient cities in Europe. Rome’s history spans more than two and a half thousand years ago – since its founding.Having served as a capital of the erstwhile Roman Kingdom and the birthplace of the Western Civilization, today it serves as the capital of Italy. Rome is one of the most visited cities in the world today – thanks to the rich history, Renaissance architecture, sculptures, buildings, paintings from artists like Michaelangelo, Raphael and others. The Vatican City being in Rome has further boosted Rome’s prominence.

One can cover the following interesting places in Rome on a given day:


Old Rome: This includes the Colosseum, Palatine Hill and Fora Romano or Roman Forums. All these three historic sites are located close to each other. Hence if you plan to reach Colosseo Metro Station (on Line B of Rome Metro) by 9 am, be rest assured that till 1.00 pm – you can cover all these three comfortably. More importantly – visit to these 3 is covered on the same ticket. You can book these tickets online and hence “skip the lines”.

A. Colosseum: The Colosseum was once the world’s largest amphitheatre. This elliptical structure has been one of the largest that had been built in the Roman Empire and is a standing testimony of marvels of Roman architecture and engineering.It was capable of seating around 50,000 spectators and could have been like an IMAX experience during those times. An important tip is to watch the Colosseum not only during daylight – but at night as well (of course from the outside). It looks stunning under the lights. Colosseum looks equally spectacular from the inside. Walk around the structure on the inside and also from the outside along the road. Some of the cafes outside serve good Italian food and house wine – though a tad expensive, worth the experience as you get to watch the colosseum from your restaurant window as you dig into your pasta and risotto’s! 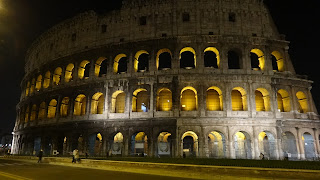 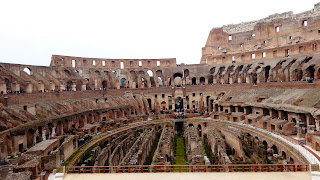 B. Palatine Hill: Palatine, the centremost of the seven hills of Rome is the birth place of Rome. The word “Palatine” is also etymological origin of the word “palace” that we use today. Palatine Hill has seen some of the famous residents like Romulus, Hercules, Augustus, Julius Ceaser and other Roman emperors. You definitely are visiting a place which is as ancient as the human civilization that is well documented perhaps. Though you may see the Palatine Hills and Roman Forums as ruins from the past, do remember that these two great sites were plundered for years to build various churches, basilica’s and other important monuments in Rome and all over Western Europe. 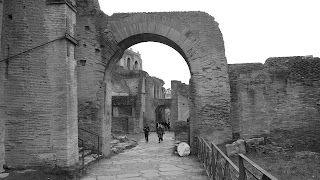 C. Roman Forum: Roman Forum – located just below the Palatine Hill was the erstwhile city centre / downtown of the Roman Empire. It used to house all the important government buildings and stood testimony to all the important events like public speeches, criminal trial, gladiatorial matches etc. The teeming heart of ancient Rome, it has been called the most celebrated meeting place in the world, and in all history. Some of the surviving structures include Tabularium, Gemonian stairs, Temple of Saturn, Temple of Vespasian and Titus, Arch of Septimius Severus, Curia Julia, Rostra, Basilica Aemilia, Forum Main Square, Basilica Iulia, Temple of Caesar, Regia, Temple of Castor and Pollux, Temple of Vesta. 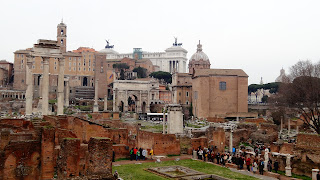 Post a sumptuous lunch, you can proceed to visit the Pantheon, which is another architectural and historical marvel in Rome.

D. Pantheon: Pantheon - built in 126 AD and one of the best preserved buildings in Rome. It has been in continuous use throughout its history, and since the 7th century!It was built as a temple to all gods. Raphael's (one of the holy trinity of Michaelangelo, Leonardo da Vinci) mortal remains rest in the Pantheon as well. The Pantheon was a very rich monument once - but has been looted to build other monuments. The Baldacchino of St Peters Basilica got most of its bronze from the Pantheon. 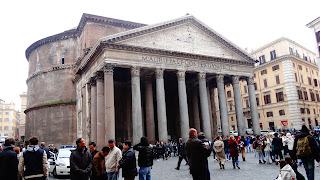 Pantheon's dome from inside – also called the occulus is open to the sky to help the visitors see heaven from inside. Almost two thousand years after it was built, the Pantheon's dome is still the world's largest unre-inforced concrete dome! Be it sun, rain, snow or wind - it continues to pour down the dome onto the Pantheon - since it was built - over 2000 years ago. 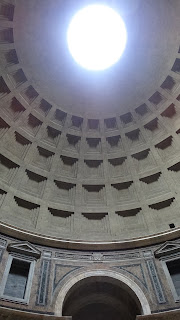 E. Piazza de Spagna/ Spanish Steps: The Spanish Steps are a set of steps in Rome, Italy, climbing a steep slope between the Piazza di Spagna at the base and Piazza Trinità dei Monti, dominated by the Trinità dei Monti church at the top. The Scalinata is the widest staircase in Europe. It also has a baroque fountain at its base called as the Fontana della Barcaccia ("Fountain of the ugly Boat"). 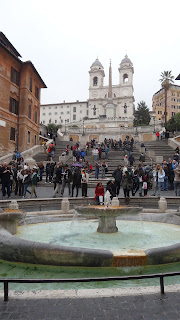 Fountains: Once you have covered the above, you would have more or less covered the most important buildings of ancient Rome. You can now walk from the Pantheon to other places of your interest. A worthy thing to do is to visit fountains – as Rome is the city of fountains and home to some of the best fountains. Some of the notable fountains to visit include:

A. Trevi Fountain in Rome is one of the largest fountains in Italy and the most famous in the world. Legend has it that if you toss a coin into the fountain, you will return to Rome again. With a vast treasure of history, culture, architecture and colors - who wouldn't miss the opportunity to toss a coin to return to the city of Rome-ance? 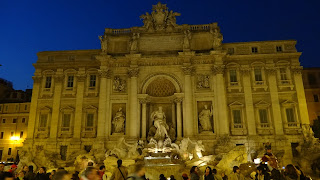 B. Fontana dei Quattro Fiumi or "Fountain of the Four Rivers": This fountain represents the four major rivers of the four continents through which papal authority had spread: the Nile representing Africa, the Danube representing Europe, the Ganges representing Asia, and the Río de la Plata representing the Americas 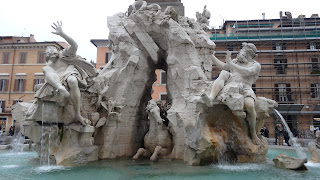 C. Turtle Fountain (Fontana delle Tartarughe) at the Jewish Ghetto. One of the quiet charming fountains - looks spectacular with the background buildings and their lights at Piazza Mattei 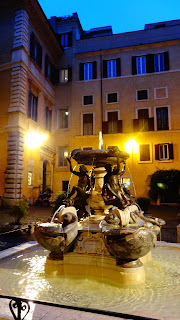 D. Fontana del Nettuno at Piazza Navona in Rome. This fountain is also known as the Neptune Fountain 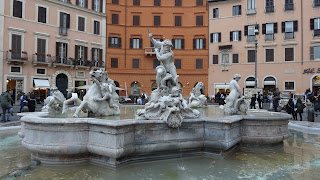 Finally if your legs did not give in to the walks in and around Rome, enjoying the architecture, buildings, vivid colors – it is worthwhile to visit the Jewish Ghettos. The Jewish Ghetto is one of Rome's most charming and eclectic neighborhoods. Walk past this place and be a part of some rich history. 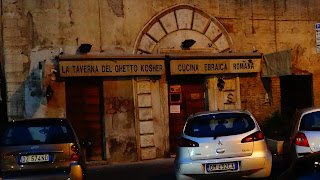 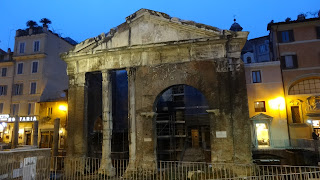 After having absorbed a lot of ancient Rome, a nice walk to unwind. You will be surprised to find a lot of old architectural buildings around this areas well – which you wouldn’t have expected. For example we saw a mini-colosseum, which upon further research on the internet was found to be Theatre of Marcellus, built in 13 BC and inaugurated by Augustus. At the theatre, locals and visitors alike were able to watch performances of drama and song.This looks stunning at night and almost passes off as a mini colosseum! 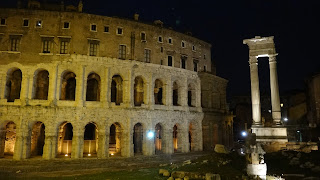 Another example is as we walked past Campo de' Fiori or Field of Flowers that can be very eye pleasing. There are lot of flower shows and other small shops in this square. You can pass through it taking a pit stop for photo enroute to Piazza Novona, Jewish Ghetto or other places. 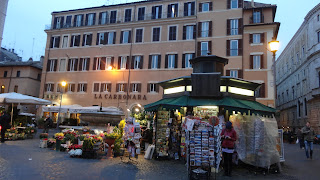 As shown in the pics below, Rome has such beauty hidden all over her that only an inquisitive and explorer like attitude can help a tourist enjoy this beauty! And while you do this - don't forget to have that odd gelato or a nice cappucino while you enjoy Rome on feet! 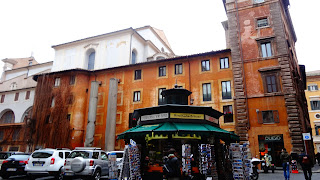 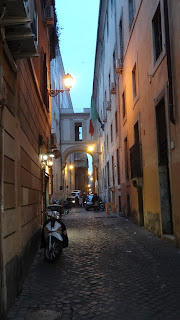 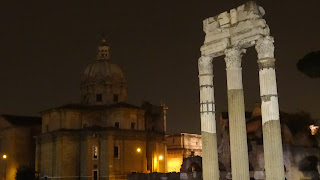 Looks like a great trip! I have very fond memories of Rome myself, such a wonderful city! And the ice cream, oh, the ice cream;)