Pubs are of two kinds –the historic ones, which have survived over the last few years / centuries or the modern pubs – typically a part of a large chain of Pubs like “Shakespeare”, “The Red Lion” etc. Leeds is home to a blend of both historic and modern pubs.

Thanks to our friend, expert & local guide - Guy, he had taken it upon himself to do the Good Samaritan’s job of hand holding us to experience some of the best historic Pubs in Leeds.  In the past 14 months, we have spent many an evenings visiting various pubs in and around Leeds city centre, experiencing the ambience and the choice of local ales and beers. Maybe our unplanned effort to thumbs down the growing prowess of the supermarkets who sell cheap and standard international beers thereby indirectly closing 15-20 pubs a month in the UK.

During these interesting times, one of the last pubs we visited was “Garden Gate” in Hunslet. One cannot easily walk to this pub from the city centre as it`s a tad far. However, it deserves a visit for anyone who likes heritage, ambience and of course a good local Leeds brewery beer.  In addition to this, if you plan to have some vegetarian food on a lazy morning – it`s a must recommend to visit this pub! I and my wife enjoyed the two varieties of Lasagne dished up by the team at Garden Gate for us.

Our local NHS clinic (Doctors clinic) is right behind the Garden Gate and over the numerous visits to the doctor; we had never discovered this hidden gem.  However, the Garden Gate has been standing in the same place for over a 110+ years (became a Pub in 1903, but was earlier a inn since 1833) – unfazed and observing Leeds transform from a city of mills and hub of England's industrial revolution to a modern city with designer shopping malls and modern world industries. Over the last century, it has changed many a owners and latest owner is the Leeds Brewery – which helps provide a rich choice of ales and beers like Leeds Pale Ale, Leeds Best, and Midnight Bell in addition to other international beers.
As you walk into this pub to grab your pale ale and meal, it is not unusual to notice the finesse of architectural marvel on the outside. Even for a novice in English history like me, this pub’s appearance will compare to that of the Victorian era. Many of such establishments – a marvel of their times are today being demolished or converted to modern architecture with glazed glasses. Thankfully, the efforts of a few good spirited souls in the past few years have now given this pub a Grade II English heritage building listing, in recognition of its architectural value and rarity. The upgrade is recent and only a handful of pubs in the whole of UK hold this status. 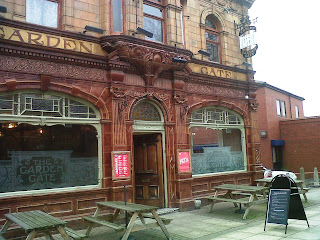 If you had a chance to get your eyes off the exteriors of this pub, the interiors will definitely capture your imagination and over awe you with their brilliance. The cosy glass panelled rooms, glazed tiling, mosaic floors, ornate mahogany fitments, long corridors leading to various rooms and the curved ceramic bar counter (where they keep the beer tap and drinks) will leave you spell bound.

There are multiple rooms in the pubs and I positively dread how it would have been to be inside one of the rooms of the pub on a cold winter evening in the early 1940’s, discussing about the Second World War and local affairs over a pint of locally brewed beer or ale, by the fireplace. I am sure the community would have been more close knit than any modern day facebook / twitter communities that we all have succumbed into? 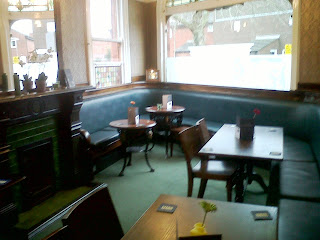 Under the able leadership and supply of some truly good local ales and beers, I hope Leeds Brewery could continue the legacy of Hunslet’s Hidden Gem – “Garden Gate” for another 100 years (in addition to the 110 years it has already survived - since 1903). 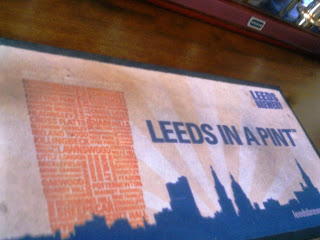 All it needs is a few heritage pub aficionados like Guy, me and you to keep the flag flying high for the likes of “Garden Gate”! Trust me, a pint of beer in the company of friends or family in a pub tastes better than off the freezer and in front of your Television!