The Pub’s have a fundamental importance to the British social life since ages. Pubs are short form for “Public House” – which are public drinking establishments for people from different backgrounds to socially interact with each other and share a drink. Just like tea rooms as indicated in my early blog on Betty’s Team room (click here for the same), Pubs have also been promoting social networking for centuries!

The pub is one of the most significant landmarks in any village, suburb, town or city in England and is the focal point for the communities around it. The pubs serve a variety of spirits like beers, wine, scotch and other hard drinks. It is always worthwhile and recommended to check the local beer that is available and famously served in the pub. This gives you a distinct experience of acquiring a taste beyond the typical branded international beer brands. I have visited a variety of Pubs in England in the last few years. The first visit was in London; where by brother in law had taken us all for an evening. I had tried Guiness beer for the first time then and it tasted unlike other international beers I had tried till then. In Leeds, over the last year – in 2012, thanks to our local expert Guy Bradshaw – Meenakshi & I have had a chance to visit a host of pubs and I was able to taste different beers, experience history of various pubs in and around Leeds. The Leeds pubs deserve a different blog of their own soon! However, one of the pubs I was recommended by Guy and had read online was the “Ye Olde Trip to Jerusalem” in Nottingham. My friend Mridul who stays in Nottingham also happened to be a forced bachelor in December of 2012 just like I was (since my spouse Meenakshi was also in India). I was bubbling with enthusiasm that week anyways – having cleared my UK driving test and was itching to go for a long drive on the UK motorways. We decided to catch-up over the weekend – a last minute plan which always works! Over the 2 days – we had a blast, having had sumptuous lunch at Chennai Dosa in Leicester,  followed by a visit to this famous pub on a Saturday night and some movies and loads conversation!

Ye Olde Trip To Jerusalem claims to be the oldest drinking establishment in England. It indicates it was established in 1189 AD.It is on the foothills of one of the Nottingham castle - about 6 minutes walk from Nottingham station. Legend has it that knights who answered the calls of Richard I to join the crusades stopped off at this watering hole for a pint on their way to Jerusalem. 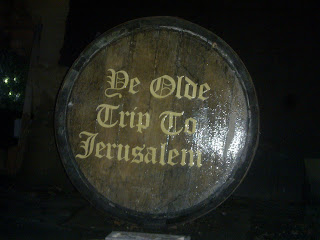 Mridul & I stepped inside the pub to have a beer and queued up behind a long queue in a very narrow and small entrance. Thought it was hardly 4.30 pm in the evening, we instantly got to know that his pub was famous and needs persistence, if you want to enjoy the drink and enjoy the ambience. The ambience inside will take you centuries back in time and you will feel you are in one of the low ceiling caves - as you jostle and queue up to get your beer from the bar. A lot of folks were already in high spirits and were cheerful and welcoming. 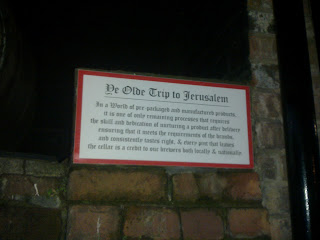 I had a pint of “Olde Trip” and Mridul stuck with a pint of “Abbott”. We walked around the pub to the other side – where there was a huge seating in the form of wooden benches in long rows in the available area. All the people were enjoying the wet and cold Saturday evening, with a beer in hand – busy in their own private conversations in a public place. The smoke from different cigarettes was forming a virtual partition or smokescreen giving one an impression of privacy between the groups in a public place. 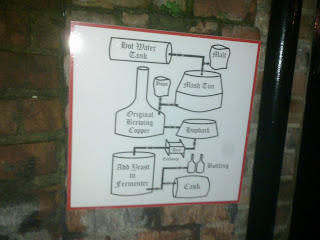 Over conversations and catching up on old times during our MBA days, we couldn’t help observing some casks around and a small picture showing the beer making process. The picture was symbolic to those chemical process diagrams I remember drawing during my school and college! Some good knowledge for a beer connoisseur like me! Hope a day comes when I am able to expertly talk about the hops, spicy ness, ales and barley on the beer and the right mix!

Post that one pint, we decided it was a good homage to the “ye olde trip to Jerusalem” and decided to head home to enjoy drinks at home! Pubs are somewhat a dying phenomenon in England now as your Supermarket stores and off license convenience stores sell beer & alcohol at rates – lower than pubs. It is essential that pubs are preserved as they house so much of history (some of the pubs in Leeds I visited are almost 120 years old!) and culture of this country! I encourage you to visit a pub to at least have a pint to support its existence, if not party the entire night! After all if you are supporting social networking by reading this blog, accessing twitter or facebook – isn’t it fair to support pubs who have promoted social networking for years?