Probably the last of the series under this topic on my blog – unless I visit another country! Having donated my locks of hair for years in India and then having cut it in US and Norway I have had a chance to have this experience in England as well.

I have been visiting England as a tourist since 2006. However, since 2011, I have been deputed for work on an official assignment.  Over these trips, I have had my haircut in London on numerous occasions and also in Leeds. The price I have paid for these haircuts is somewhere between £ 4 and £ 6 per hair cut session (excluding any tip which is around £ 0.50 to £ 1.00).  Because Britain has been open to immigration for years (prior to 2010), the influx of Asians, Iranians and African’s makes it a very price competitive market.

In London, my first few experiences have been at the salon on the High Street just before the junction of Ealing Road and High Street in Wembley. The hairdressing salon with a signboard of Irfan is quiet prominent amongst other signboards that may well make you feel you are in India. Signboards like “Chennai Dosa”, “Bank of Baroda” donning the entrance of these Indian bastions may make a local Englishman feel like an outsider! Irfan typically has hairdressers from Pakistan/ border of Afghanistan and Pakistan or from Afghanistan who have sought asylum in England. With typical Bollywood music playing in the background and conversation in broken Hindi with Urdu influence,  you doesn’t feel you are in a foreign country when you close your eyes as the scissors go – click, click!

In Leeds, I have been able to find another cheap hair dressing salon – right next to a Persian restaurant in the city centre.  An African man does a good service of cutting your tresses for not more than £6. With conversations spanning London Olympics and other sports and travel around the world – I have fond memories of having visited him for 2-3 times. 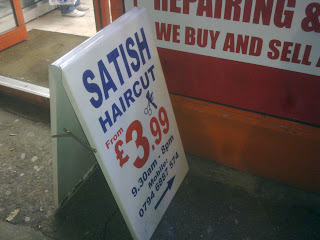 Early this month, I was literally forced onto having a haircut in London (though I knew long before I needed one, but was just plain lazy!) by my sister. Since my wife is in India and my work was taking me more often to London, I had crashed into my sisters & brother-in-laws for over a week. Early December, I spotted a hairdressing salon on Wembley Plaza, right outside Wembley Central station which proudly proclaimed to cut your tresses for £3.99/- under the name of “Satish Haircut”. I was a tad circumspect if the low price had something more suspicious about it. After running it past my brother – in-law to get his local expertise, I decided to take a risk. Satish hairdressers welcomed me and thankfully – there was no waiting time at 5.00 pm on a cold Tuesday evening. Satish’s cell phone was playing Kumar Sanu songs from the Bollywood movies of the 1990’s in the background. I explained to him in plain Hindi (like we do in India) on what needs to be done, closed my eyes and went into a trance feeling i was in India – thanks to the music and an Indian guy around. In about 20-25 mins I was down a few white and black hairs off my head and got closer to the haircut I always wanted so badly while abroad, but never got. My tip justified my satisfaction for sure! Thanks Satish – if I happen to come next time – all my tresses are to be cut by yours truly! Thanks for the Gujarati conversation in the background you were having with your other colleague; I could well have been in Ghatkopar, Mumbai in India that in Wembley, England that chill December evening! Home away from home!

Having a hair cut is the cheapest in England, outside of India – if you know where to look for – especially Asian/ African dominated areas. Even while I was in Norway, whenever I used to visit England, I planned my haircuts to ensure those £7-£ 10 were saved - eventually to be splurged in something else which was much more trivial!