In and around this magnificent city, It is very easy to steal glimpses of nature that may leave you perplexed. You may feel that it is too good to be true and what you saw was a really creative figment of your imagination.  You can steal these glimpses even during the winter / snow season, when it is about to end. After having quiet a few rainy weekends (rainy = normal in Stavanger) the sun was out on Saturday – March 5th and the two enthusiasts – Ragish and Raghu woke the remaining eight of us from our weekend slumber and lazing by organizing an on-the-fly island hopping trip. We all got equally excited and within an hours time, assembled at Fisketerminale (the pier from where the boats/ ferry leave). After spending an hour in chaos, confusion and some leg pulling, we finally settled upon the island “Tau”. Tau is a village in the municipality of Strand and has about 3000 inhabitants.  “Tau” is about 20 minutes by ferry from Stavanger. It takes about NOK 43 (£ 4.5) each way per person, but an enjoyable ride on the sea. You get to see some explicit views of the sea kissing the mountains, horizon. We were out on the deck of the ferry, braving the winds with gusto and photographs for posterity. We finally kissed the harbor of Tau. There were a sea of cars and people waiting to get out of our ferry and equal numbers outside, waiting to get in. It is easier for cars in Stavanger to take the ferry and come to “Tau” and vice versa.


The name “Tau” comes from the Norsk word Taufr meaning witchcraft, and one believes there was a sacrificial field here in the Iron age. In the viking age, and maybe even earlier, it was a cultic centre. It was so important that they even tried to change the name of the place. They tried to change the name of the area to Sevarbakke, but had to give up after some 3 centuries.
Legend has it that Erik Bloodaxe had a royal estate in Tau, on Liland. His wife, Gunnhild, was said to be a powerful sorceress. Erik was overthrown by his brother, Haakon the Good, after only 5 years reign. He then went over to England, and became the last independent viking king in Northumberland. He fell in a battle in Southern England some years later.

In the middle ages, Tau was a centre for flour mills and saw mills. There was also a lot of timber being shipped out from Tau, to the UK, the Netherlands and France. In 1855, they built an industrial flour mill and a brewery in Tau. This became a corner stone of the local community, and led to new growth. Today, most people in Tau work in Stavanger and commute by ferry. Though we didn’t find witches swishing away on the harbor on their broom sticks, we did have a eerie feeling once we landed at Tau. There was absolutely no one in the pier in 10 minutes after
the ferry stopped, it was a deserted island as all cars and the people escaped onto thin air. 10 exotic Indians, one beautiful island and the curiosity got the better of us. We saw a hill around, which later we got to know was called “Taurafjellet” It is apparently the most scenic viewpoint over Tau and some part of rural Stavanger.

After seeing the hill and no hint of a pizza shop -  “Pizzabakkeren” around, we decided – why not climb it? There was no one to guide us around and this is an unconventional tourist spot, so no tourist information centers. Collectively our group of 10 was innocently armed with some left over potato crispies, salted peanuts, half a dozen beer cans, over 2 litres of water. Why innocent? Only cos we never knew we gonna trek Taurafjellet – and that’s what we did!

We took a calf path, which looked to be leading to someone’s home or to a dead end. Either ways…though some of us were circumspect…the others barged ahead and the rest followed. The surroundings gave absolutely no sound of human existence, though there were plenty of houses around. What broke the serenity was the barkings of an enthusiastic dog. The dog never saw so many people this entire winter – especially Indians, who are exotic dishes in Tau! After barking out a yelp or two in chorus, we surged ahead and continued climbing in totally under prepared trekking gears, boots, very little food and no clue of a path to the top but with loads of enthusiasm. 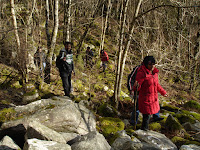 Making climbing sticks out of dry wood and by placing our feet on the marshy and slippery hills with the same calculations like that of a move in the game of chess, we overcame boulders, marshy and damp land and climbed further up. After a pit stop, we finally found the actual trekking path and then had a smooth climb up hill. Overall, with a combination of unconventional calf path + actual trekking path, it wouldn’t have taken us more than 30 -45 minutes (including breaks) to trek up.

Once up, we stole magnificent views of island “Tau” and the surrounding areas. Out came our cameras and we gave this place more than its share of attention by clicking to the dozen. Some photographs in groups, some in solo – we ensured photographs in every permutation combination that we may ever need to present as proof of being to this place, if ever needed even by the court of law! Out came the snacks, the beer and water. After munching to the dozen and feeling oily to the core (because of the crispies + salted peanuts), we started the descent and finally reached down in the next 30 minutes. Downhill was nothing but swaying to the tunes of lady gravity and trying to not fall/ slip down. Finally we reached the bottom of the hill and saw the beginning of the actual trek path – the path we should have ideally taken in the beginning to trek up.

After walking on the street in no direction and nowhere in particular, we turned around and ran, fast walked to the pier to catch the next ferry back to Stavanger. All in all…an amazing trip and adventure. The ones you have grown reading about in “Secret Seven”, “Famous Five” but secretly wishing you were a part of. And this time…we were! Hats off to the 10 Indian Vikings from Stavanger with the never say die enthusiasm who did that!

Awesome travelogue.. mebbe consider writing a book of these experiences.. Around norway in 24 months.. :)