Every country has its own special iconic landmarks. Around these landmarks hinges the history, culture, identity and tourism of that country. If UK is identified by the West Minster Abbey, US by the Statue of Liberty, France by the Eiffel Tower and Italy by Colosseum, it definitely has to be Sydney Harbor Bridge and Sydney Opera House that captures Australia in the minds of the people world over.

Having spent over six months in this lovely country and continent in the Southern Hemisphere, I was always itching to discover the city by walk. There is a special energy that you absorb and feel a part of, when you walk the big cities in the world. Whether it is discovering New York on foot or having your inch of history as you walk along London’s majestic Victorian era buildings, you get intellectually absorbed and exhausted – as it’s that juncture when your dream of being a global traveler is turning into a reality.

On a lazy Saturday morning, Meenakshi (my partner in crime for all my plans to discover off beat and non touristy locations in any country) & I decided to put the weekend chores of house cleaning, laundry, cooking a sumptuous South Indian meal and vegetable shopping at Flemington markets on hold and do what we wanted to do for a long time, which is to feel the energy of Sydney. The fact that the summer of December underlined the last Saturday morning was a real delight in retrospect. We decided to have a walk along the iconic Sydney Harbour Bridge – which is recommended by many to get a feel of the energy of this city.

From Strathfield (the suburb where we live), we took the local train going towards Hornsby and got down at Milsons’s Point.  As you get off Milsons Point station and walk on the other side (the non Luna Park side), you will see the stairs going up – which is the beginning of the Sydney Harbor Bridge.  The path to the stairways is well sign posted with “Sydney Harbor Bridge” as you exit the station and you can’t miss them.
The Sydney Harbor Bridge, one of the largest steel arch bridges in the world, is however not the longest in the world.  It is currently ranked as the sixth longest bridge in the world. As you climb up the Bridge Stairs, do notice the old church and sloping roof houses that dot the skyline on the eastern of the bridge.

As you walk along the bridge and get a sneak peek into Sydney’s harbor, jostling tall rise buildings and the Sydney Opera House you realise that alongside you there are about six lanes of highway roads and two railway tracks which act as the lifeline of this city of Sun, and tourists and locals perennially dressed in crumpled t-shirts, shorts and hooded T-shirts.

As you walk along the Sydney Opera House side of the Harbor Bridge, the stunning views will make your leisurely stroll more enjoyable. You will find a crowd of locals and regulars who walk with their partners and friends or by themselves with conversations in the air or headphones on their ears. For the first time leisurely walker, the stunning views definitely mean more camera time and poking it through the metal barriers along the bridge (to prevent people from throwing themselves or anything big into the water).
You can almost spend an entire day tracking the foamy scratches made by sailing boats and ships on the water around the Sydney Opera House. The harbor opens out to the wider Ocean in a very dramatic way, which makes you realise the beauty of this view from the Sydney Harbor Bridge, underlined by the lotus shaped Sydney Opera House. 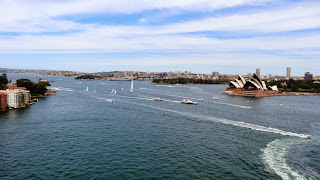 As per popular trivia, the Sydney Harbor Bridge was built over 6 years and was painted grey as no other colour was available in such a large quantity – 272,000 litres! The Harbor Bridge is rightly nick named “The Coathanger” because of its arch based designed. The Sydney Harbor Bridge is also one of these infrastructure projects in “The Great Depression” era of the 1930’s which kept the people occupied and economy going for Australia – in line with other projects across the world like the National Highways of the USA. 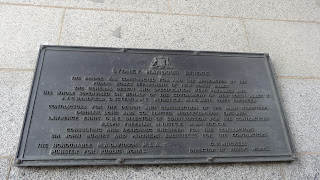 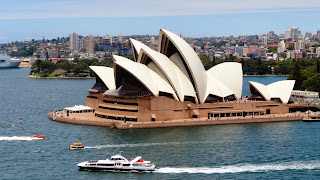 Towards the end of the walk along the Sydney Harbor Bridge, it is difficult to ignore the remains of the mills and European style buildings around an area known as "The Rocks". A casual tourist may almost ignore this striking contrast while he looks for the modern sky scrapers, Sydney Tower and huge cruise ships docked around the harbor. 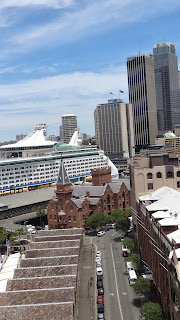 As you finish the walk along the Harbor Bridge, you can step down the stairs and walk down to “The Rocks” which is historically rated high for having the first European convict settlers. The two and a half kilometre walk along the Sydney Harbor Bridge with at least 30 pictures on your camera and indefinite breaks will leave you throats parched and leave you wet with sweat. As you step down the stairs to go to “The Rocks” – try out the gelatos and ice-cream from this traditional ice cream van. "The Rocks" deserve a separate blog soon. 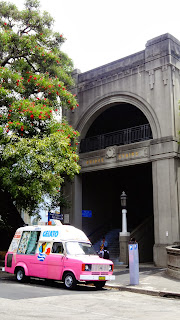 After meandering through the weekend markets at "The Rocks" and walking around cobble stoned footpaths and narrow bylanes which recreated European culture, music, color and festivity, we stole some good views of Sydney Harbor Bridge (SHB) from "The Rocks". 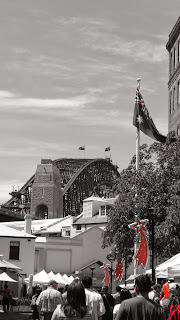 It is a shame that the early European convicts who landed in Australia in this exact same place, couldn't enjoy the majestic looks of the SHB. Some of Sydney's very old pubs are home to this part of the city.  A hot corn in hand, kept us company to tame our hungry tummy as we found our way from around the canopies with local Sunday shops to walk along some of the old and "dodgy" neighborhoods around the rocks. 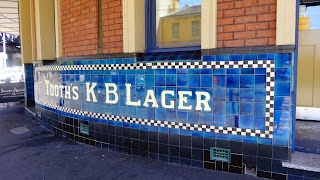 We resisted all temptations to enter "the Price of Waterloo" a British style pub from the outside (started in the 1800's) and walked our way from "The Rocks" to in and around the pedestrian footpath that routed us along highway and to the streets around Wynyard Station back to the famous "George Street".  We wanted to have more than our share of history, hence took a quick look at the Queen Victoria Building (QVB) - a Victorian styled shoppers paradise from the outside and inside.
Since we were in Town Hall, the suburb where Meenakshi commutes to work, we decided to have lunch at her favorite Vietnamese- Italian  local cafe. We had a quick grilled vegetable pannini and coffee. Meenakshi's coffee card got 2 more stamps, as she earns her way to her 10th coffee, which would be free. Our legs got the much needed rest after nearly 3 hours and around 5 kms of walk. After the lunch, we took the train back from Town Hall Station to Strathfield to head back home - a day indeed well spent! 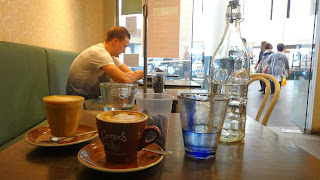 Deepu....this is so well written....the way you have described your entire experience makes me eager to explore this weekend activity as soon as I reach Sydney back...and the best part is we will have experienced tour guides with us (u & Meenakshi) :)

Thanks Prichu! Appreciate your feedback! Tu aaja we guys will explore it further more and spend more time at the Rocks - a nice place with European touch in the midst of Sydney!

Right ! I wish I could be there…. In the meantime, I am just pinning the pictures …