Mumbai is unarguably one of the fastest cities in the world. 24 hours is not enough to get things done in this city. There is always more to do. For a person working in this city, each moment is like a ticking time bomb. You never know how it went and what is in store the next minute. For any office goer in this city, Friday evenings are the happiest, Saturday is a real treat and Sunday gets depressing – especially from 3pm as one starts counting hours of enjoyment left before the next working week begins! In short, the weekend will come and swing by you – without making you realize how best you could have utilized it! In this fast paced city, at times it is important to take a break on one of these days and enjoy the feel of being a Mumbaikar! One of the coolest places to hang out in the city is to go to Victoria Terminus (VT) (now termed Chattrapati Shivaji Terminus) / Churchgate. This is the la Grand Central of New York or Oslo Central Station of Oslo. VT station is the part of Mumbai which the snobbish refer to as SoBo (South Bombay). The western, harbour and central lines run trains which terminate at VT / Churchgate – so access is always not an issue. 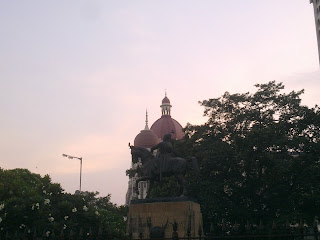 VT is Mumbai and Mumbai is VT. Point made! A walk across the city through the various by lanes can infuse an infectious enthusiasm to even the laziest of bums – like me! I love criss-crossing the footpaths, finding my space in between street peddlers – who sell everything from a “Shantaram” paperback for Rs. 50 (1 dollar) to things which I may not need, but end up buying for the sheer offer being made! There have been countless memories i have had since my growing up years – walking through every nook and corner of VT, especially through the dusty path through Azad Maidan – with the Bombay Gymkhana turf on one side and the sweaty “future Tendulkars” swinging their cricket bats on the other side. Azad Maidan is also a prominent platform for protestors from all over India, who vent their protests on any issue ranging from farmers suicide to Smriti Irani’s character assassination in “Kyun Ki Saas bhi Kabhi bahu thi”! I have spent donkeys hours striking a good bargain at “Fashion Street”, watching movies (before the Multiplex era) in New Excelsior, Regal, Sterling and other stations or travelling to the Bank of Tokyo office – to meet my sister. The tasty food at “Khao Galli” (Food Street) still makes my mouth water! The walk across Queens Necklace in Marine drive is always special –be it night or day. I also have fond memories of going to VT with my dad, looking for Famous Five and other novels and novelties during my summer breaks. Now as i write, i feel biased that the only memories i have of my growing up years is only about the time spent in VT and nowhere else!
Over the years the only thing I had always wanted to do was a tour of VT – on a shoestring budget – the way i used to when money was scarce, time was plenty and i was a student. Those were the days when a Rs. 100 ($2) would be enough for round trip travel, a can of pepsi, a lunch at khao galli, an English movie in Regal and a good bargain T-shirt at Fashion Street. Small change left was used to buy roasted peanuts. I had always talked of doing this shoestring budget trip often to my wife – to remember the good old times, but since i was out of Mumbai for most of the while, i never got a chance. Finally, the day came in Oct 2011. I was in India in 2011, in between assignments. I and Meenakshi decided to pay homage to VT and have varied experiences – a long pending thing for us one of the weekends.
We took the local train from CBD Belapur to VT Station and then took a taxi from VT Station to Gateway of India. We resisted the temptation to walk as it was already late by the time we left from Belapur (sometime after 3pm) and we did not want to miss the sunset at Gateway of India. We had also narrowly missed the Double Decker BEST Bus, which we had so narrowly missed by a whisker! Once we reached Gateway of India, it was like any other tourist destination in India – tourists trying to capture the moment on cameras than with their eyes and heart, street vendors trying to make a quick buck selling roasted corn, ground nuts or sweets. Luckily the Sun was still lazy to go down the Arabian sea and the sky was still lit with light. We quickly captured the Gateway of India, Taj hotel on my Nokia E72 cell phone and then went back to enjoying the moment than clicking snaps. Taj Hotel - rose above the ashes around it after the 2008 terrorist seige, when it suffered damages due to gruesome act by terrorists. It is indeed a standing testimony to the "never say side" and "chale chalo" (keep going) spirit of Mumbai.
After seeing the Gateway of India and Taj hotel to our hearts content, we had some salted peanuts with onion and tomato – with a dash of lime on it, from one of the street vendors – a typically Mumbaikar’s delight. I can have this snack anytime / anywhere! 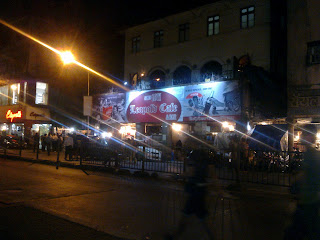 When the sky set, we had a look of the magnificient Taj, lit on against the backdrop of a dark sky. With horse chariots donning the city roads in the evening, we walked across and went to Leopold Cafe. Leopold Cafe is one of the most famous cafes – famous for food, beer and ofcourse “Shantaram” and the unfortunate event of gun fire during the terrorist siege in Mumbai in 2008. My hopes of sipping a beer crashed as it was a dry day – honouring Gandhiji’s birth anniversary – which was just a week before. We had some fries and other food and walked across the road to Marine Drive. It was a good walk and along the way – we treated ourselves to delicious pan and some bottled Bisleri water. By the
time we reached Churchgate station (just minutes before touching Marine Drive), we decided to take a stopover to have Icecream Sandwich in a small family run Parsi shop – called “Rustoms”. This is just a little ahead of “Gaylord” restaurant. The Icecream Sandwich place recommended by my wife was a delight. A no frills shop, with an old Parsi lady at the counter manning the cash and 3-4 people serving customers on the table. This dwindling family business still manages to smile through the portraits of the previous generations of Parsi’s donning the walls. A tasty ice-cream followed by some water re-charged our batteries to walk till Marine Drive / Queens necklace.
Thankfully the weather was perfect – windy and not humid. We sat on the stone bordering the cliff, amongst couples who were trying to find their private moment in this maximum city and regulars – having a good time with friends. A few pictures later, we had a quick bite at the Naturals ice cream parlour. We then realized we need to go home and took a taxi to Navy Nagar. We wanted to take an AC Bus from there, back to CBD Belapur. Unfortunately, we had missed the last bus, so we took the normal BEST Bus to VT Station. This fulfilled another experience – of travelling by BEST Bus in VT. We then took the train back to CBD Belapur and came back home well before time.
Indeed an amazing day with a variety of experience. Would have loved to spend almost the entire day walking across the city, but maybe – that will be done some other day! Overall cost of the outing was less than INR Rs. 400 ($ 8) for two people – pretty reasonable for two people. Isn’t it?
﻿
﻿

Nice albeit long narrative and pics to go with it. Keep blogging.